Tens of thousands of homes remained without electricity a day after one of the worst storms in a generation struck the UK, bringing likely record-breaking winds which claimed at least 12 lives across northern Europe and wrought widespread disruption and destruction.

As northern England continued to face blizzard conditions on Saturday, insurers warned the clean-up from Storm Eunice could cost hundreds of millions of pounds – while further forecasts of gales threatened to hamper recovery efforts in the days ahead.

While some were left reeling from the damage to their homes and belongings after roofs were torn from buildings and large trees uprooted, others mourned those who lost their lives in the storm, including three people in England and one British citizen in Belgium.

Similar devastation was witnessed on the continent, with Germany suffering three deaths and four in the Netherlands. In Belgium, a 79-year-old British man died in Ypres after falling from his boat in the high winds, according to reports.

A woman in her 30s in Haringey, north London, and a man in his 20s in Alton, Hampshire, were also killed when their cars collided with trees, while a man in his 50s died in Netherton, Merseyside, after debris struck the windscreen of a vehicle he was travelling in.

Tributes were also paid in Ireland to a “devoted” father and council worker killed “in the line of duty” by a falling tree while clearing debris in County Wexford.

People in the UK were warned to brace for more extreme winds in the days ahead, with the Met Office issuing a further spate of weather warnings.

These included weather alerts for snow in force on Saturday, with up to eight inches thought to have fallen in some areas, prompting further disruption to road and rail travel, including hindering Aberdeen paramedics’ efforts to take a poorly 10-month-old baby and her mother to hospital.

An alert for rain is in place from midnight until 6pm on Sunday for Cumbria, Lancashire and West Yorkshire, with forecasters warning that parts of England could see gales of up to 70mph – the same speed recorded at Heathrow Airport on Friday when hundreds of thousands tuned in to the Big Jet TV Youtube channel to watch planes attempting to land.

While falling significantly short of the 122mph gusts recorded on Friday at the Needles, on the exposed western tip of the Isle of Wight – thought to be the strongest ever recorded in England – forecasters have issued further warnings for wind across England, Wales and Northern Ireland on Sunday.

“This will have an impact on the clearing up process over the course of the day,” said Met Office meteorologist Greg Dewhurst.

With that process including the mammoth bid to restore power to homes across England and Wales, business secretary Kwasi Kwarteng warned on Saturday afternoon that strong winds were “impacting restoration efforts” – but said most customers were expected to have their power supplies “restored promptly”.

In an update, the Energy Networks Association said that, while some 1.22 million homes and businesses had been reconnected, about 155,000 customers remained without power in Wales, and in the south and east of England.

Meanwhile, National Rail said many operators were reporting “major damage” to the railway and obstructions on the line, and urged passengers to check before travelling.

“Network Rail have additional engineers out across the network dealing with the continuing problems, and will check all affected lines for damage before reintroducing services as quickly as possible,” it said.

‘Silence of the Lambs’ moth found in the UK 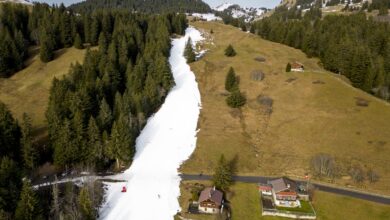