It’s long been thought that our lives are “fixed” by our mid-thirties. That’s when we’re apparently meant to have found our forever partner. When we’re meant to have found a stable job, and one that will carry us through to retirement. And when we’re meant to be proud owners of a three-bedroom house within commuting distance to a major city. It’s there that we’ll raise at least one child and a raft of grandchildren. The rest of our lives, according to this ridiculous metric, are then set in stone.

So if our personalities can be fluid, surely other aspects of our lives can be too? That’s the premise, at least, of a new TV show. Sex and the City and Emily in Paris creator Darren Star has returned with Uncoupled, which launches on Netflix this week.

It follows Michael (Neil Patrick Harris), a real estate agent in New York, who is forced into a total life overhaul when his boyfriend of 17 years abruptly leaves him. Instead of wallowing in uncertainty, though, Michael leaps into the great unknown. There, he flourishes.

He’s not alone. More and more people are starting over in their forties and beyond, by choice and by circumstance. Here, Hannah Fearn speaks to six of them.

Jo Atkinson, 45, left behind her “work hard, play hard” London lifestyle after her mum passed away. She now lives a rural life in the New Forest and feels happier and healthier than ever.

“Five years ago, I was a Clapham social butterfly. I worked in the City, so I would cycle to work, go to the gym, pop out for a coffee, and go for dinner and drinks after work. I’d be out socialising pretty much every day of the week. My cooker would regularly have dust on it – the telltale sign of a London lifestyle – and weekends would be spent feeling quite hungover and going for brunch.

“When I turned 40 I started to question things for the first time. I’ve got a huge circle of friends, but I manage projects for a living and I was managing my social life like a project, constantly filling up my time. I suddenly felt like I was the oldest person at all the bars around Clapham.

“Then the trigger for the change was my mum passing away at the end of 2019. I decided to go and do something completely different and handed in my notice on my rental flat, didn’t renew my contract at work and found myself a job in a horse riding holiday centre in France. Unfortunately, the pandemic hit and France locked down, so that was cancelled, but I had already given up my flat so I moved into a holiday cottage in the New Forest near where I grew up.

“Once I’d settled a bit I asked myself, do I really want to go back to London? I now had a completely different lifestyle. I’d acquired my mum’s dog, got myself a cat and was horse riding regularly again. I was living this outdoorsy life and really enjoying cooking at home. I decided to stay and buy my own home.

“A lot of my friends have been really shocked at how quickly I’ve adapted. I can’t think of anything worse than going to a bar in Clapham now. I rarely go out for dinner or drinks. I don’t have a gym membership but I do a lot of yoga at home. It feels so much healthier than what I was doing before.

“My previous lifestyle was getting very stale but now I can see a future. I’ve bought a house and my pension pot is growing nicely. All the things I’d been putting off to play Peter Pan in London I’ve done.

“I guess I’m not scared of growing up and growing old now; I’m looking forward to it. I recently had a couple of months off between work contracts and I loved it. I was so busy. I realised this is what retirement will be like. You shouldn’t stick with what you know just because it’s familiar and safe. Change is wonderful if you embrace it.”

Teacher and director Sarah Spencer, 44, broke up with her partner during lockdown after multiple attempts to conceive failed. Then she decided to go it alone via IVF with donor sperm and eggs. She’s now a solo mum to a five-month-old daughter.

“I went to drama school and always wanted to be a director but I became a school teacher to make money. You get into it, you get used to being paid, and I ended up teaching full time until I was 30. But one day I just couldn’t take it anymore. I quit and set up my show, which consumed my early to mid-thirties. I didn’t prioritise having a child, even though my partner and I were already trying.

“I went to the doctor when I was 35 to ask why it wasn’t happening and my doctor just said I need to relax. It was only when they finally suspected endometriosis and I got a hospital appointment they said ‘that ship has sailed’. So we tried IUI and IVF, but it didn’t happen. Finally, I had a missed miscarriage, and after that my partner said he didn’t think it was the right time. He wanted to revisit it in five years. I couldn’t do that, and we split up in the middle of lockdown. I thought, that’s it, that’s my chance gone.

“But then I realised: with my show,Notflix, off due to pandemic restrictions, I had all the time in the world to make this happen. If I didn’t throw everything at it, I’d regret it for the rest of my life.

“I looked into egg donation. I only had one chance at IVF left and so I wanted to give it the best chance. When you read about egg donation it’s one of the most inspirational things. Going into IVF as a single woman is amazing because you have all the control yourself. I was 42 by now, so chose an egg from a Scottish woman in performing arts who was just 23, and I had sperm imported from the US.

“IVF is amazing because you even see the embryo in its petri dish before it goes in. They put it in and instantly I could feel it, it just felt right. It worked. 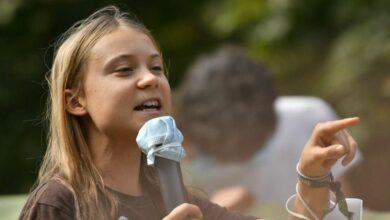 Greta Thunberg calls out the hypocrisy of Earth Day 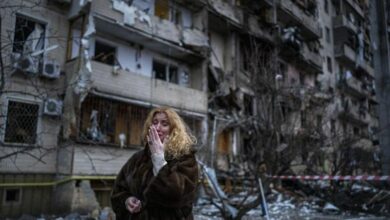