It is tempting to call The Forest a puzzle – but to do so would be to imply that the pieces fit together. Florian Zeller’s compelling but befuddling play is full of shifting identities, repeated and mutating scenes, and an increasingly deranged amount of flowers. It all adds up to a strange and unsteady whole. A somewhat unsatisfying one, too.

Pierre is having an affair with a younger woman (Angel Coulby), The Girlfriend, who is increasingly becoming a problem. He loved her at first (at least, he thinks he does; he’s not sure), but now she is asking him to tell his wife about her, and Pierre is panicked. He’d “never do anything to hurt” his wife, you see – a moment that plays out with just the right amount of knowing irony. Both Stephens and McGann give tremendously pathetic performances, baulking and quivering at the mess Pierre has got himself into, and never shying away from the moments of cowardly cruelty.

That the women appear to have no identity beyond their relation to the men is perhaps the point, though it doesn’t work for me. Zeller is clearly fascinated by the duality of man – how men shift their identities, how they put on masks – but in exploring that duality, he renders the women insignificant. “For me she was an abstraction, an idea, a vague idea,” says Pierre’s lover of his wife. But that’s what all the women of The Forest are. Millie Brady is empathetic as Pierre’s daughter in the opening scene, but her entire plotline exists to elucidate her father’s own follies, and she basically disappears after that. Gina McKee gives as subtle and magnetic a performance as ever, but her character is opaque and thinly drawn. Her emotional climax is badly lit, and thus wasted.

Still, Isobel Waller-Bridge’s sound design, all low rumblings that ramp up through the play’s slight running time, is appropriately unsettling, and piecing together a kaleidoscopic narrative that is handed to you in fragments is engrossing enough. I just can’t shake the feeling that Zeller has got a little lost in his own puzzle. You can’t see the forest for the trees.

‘The Forest’ runs at Hampstead Theatre until 12 March 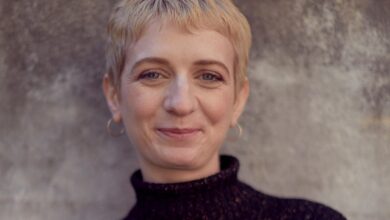 Liz Kingsman: ‘At first, I got really hung up on people misinterpreting One Woman Show’