What started as a 13-year-old girl’s coronavirus lockdown project turned into a deadly shootout at her home when a stalker took his obsession to near-lethal extremes.

Ava Majury, now 15, is a TikTok star with more than 1 million followers. One of those followers, an individual using the name EricJustin11 – real name Eric Rohan Justin, 18 – became dangerously obsessed with her.

In an interview with The New York Times, Ms Majury’s family recounted a terrifying encounter in 2020 involving the stalker and an armed home invasion.

Justin began interacting with Ms Majury in early 2020, sending her Snapchat and Instagram messages and joining online video games she was playing with her brothers.

Over time, Justin’s obsession with the girl became worrying. She learned that her hometown friends in Naples, Florida, were selling the man photos of her and other information, including her cellphone number.

Justin began calling and texting her, and even agreed to do one of her classmate’s math homework in exchange for information about Ms Majury.

“I had to unfollow all my local friends and Jersey friends,” she told The New York Times. “And everyone around me was like, ‘Oh you’re going Hollywood on all of us, you don’t want to talk to us anymore.’ And I’m like, ‘You’re selling my stuff.’”

Eventually Justin asked Ms Majury if she would sell him selfie photos. She consulted her parents, and they allowed her to do so, noting that the photos were already available online.

Ms Majury said she never sent any photos of her body, just her face, which she claims is the crux of her brand.

“It was just pictures of my face, which is what I assume that he was paying for. My whole thing is my pretty smile — that’s my content,” she said.

Eventually the pair agreed to a price, and Ms Majury sold Justin two photos for around $300.

After that exchange things began to take an uncomfortable turn for the teen; Justin began asking her to send “booty pics” and shots of her feet. She said he wanted “stuff that a 14-year-old shouldn’t be sending,” especially to an adult.

Ms Majury blocked Justin on all of her accounts. He responded by desperately pleading with her to unblock him, even sending her over $500 along with the message “sorry this is all I have left I’m broke.”

Ms Majury’s father then texted Justin, telling him that his daughter was a minor and demanding that the 18-year-old stop texting her.

The demand did not deter Justin. He contacted one of Ms Majury’s male classmates to ask if he had access to a gun, and shared his plans to assault her. Justin said he thought he could “just breach the door with a shotgun.”

When Ms Majury found out about the messages, she reached out to her classmate, who confirmed the conversation happened.

Mr Majury tried to reassure his daughter that Justin was just ” one of these keyboard cowboys,” noting that he lived hundreds of miles away.

On 10 July, Justin arrived at Ms Majury’s home, entered, and blew a hole in her bedroom door with a shotgun.

Biden cheat sheet shows instruction for him to ‘take YOUR seat’ 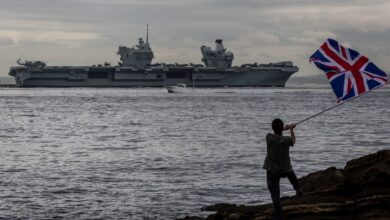