Tim Blake Nelson is grateful to be here. “My mother is a holocaust refugee,” says the star of Watchmen and O Brother, Where Art Thou?, in a voice that only half resembles the gravelly southern drawl he often adopts on screen. “She and her parents passed down the credo that we are lucky to be alive; the very fact you’re here is something you have to earn. A life should be lived in pursuit of tikkun olam.” He’s referring to the concept in Judaism, he explains, that means “repairing the world – leaving it somehow better than when you got here”.

The same could certainly be said for Nelson’s many screen appearances: the 57-year-old is a scene stealer whose first-rate character work can elevate a film, even if he’s only got a few lines. He’s capable of wringing broad humour and heart-pinching pathos from just about any script, though he’s best known for his enviable repertoire of goofballs and eccentrics – a niche that he has inhabited as well as just about anyone. “You’re not going to put me in the lead of a romantic comedy,” he jokes, from his home in New York.

To devotees of the Coen brothers, Nelson is a familiar presence thanks to his two collaborations with them: as fugitive naïf Delmar O’Donnell in the dust bowl odyssey O Brother, Where Art Thou? (2000), and as the titular singing cowboy in the masterful anthology The Ballad of Buster Scruggs (2018). Nelson explains that he was offered the O Brother role – his breakthrough – precisely because of his lack of celebrity. The Coens knew they were filming in widescreen, with a lot of three-shots of the film’s central trio of characters, and that this would require an unusual amount of close-ups of the film’s lead, George Clooney. Clooney’s other chain-gang mate, John Turturro, was happy to cede the spotlight, having worked with Joel and Ethan Coen before on Miller’s Crossing, Barton Fink and The Big Lebowski. But for Delmar, the brothers wanted an actor who couldn’t afford vanity, who wouldn’t “have their feelings hurt” by the frequent Clooney close-ups. So they opted for Nelson, then better known for his off-camera work as the director of Eye of God, the film adaptation of a stage play he had written. Nelson’s Delmar was a few Homers short of an Odyssey: a kind-hearted but simple man who follows Clooney and Turturro around with blank credulity.

Two decades later and Nelson has carved out a distinguished career, appearing in projects as varied as YA drama Holes, dystopian thriller Minority Report, broad comedy Meet the Fockers, Marvel blockbuster The Incredible Hulk, and his latest film, the indie western Old Henry. And yet Nelson remains self-deprecating about his status as a supporting player. “I think people are often justifiably convinced that an audience can take only so much of my face,” he quips. “Put me up there and the audience can thank God they don’t look as bad as I do.”

He’s being hard on himself – there’s something specific and unusual about Nelson’s face. It’s one that Nelson has leveraged to his advantage in many of the roles he has taken, concealing his keen intelligence behind that same daffy grin, those disarmingly earnest eyes.

“I thank my lucky stars for the Coens and their acolytes, who are interested in putting people on the screen and who look more like the rest of us – or even a little worse,” he says. “I rejoice in the appreciation of the gargoyle.

“And, frankly, those are the kinds of characters I want to watch. I’m not sure if it’s the way I’d feel regardless or whether I’ve been backed into this by genetics, but I like it this way. When I set out 30 years ago, that’s precisely the career I fantasised about having.”

Nelson’s latest project Old Henry, which he refers to as a “micro western”, gives him the rare chance at a lead role. He plays a widowed farmer whose violent past resurfaces after a badly wounded man is discovered near his home. It’s a tight and engaging piece of work with a somewhat deceptive modesty to its scope. Set in rural Oklahoma in the year 1906, the film makes good use of its classic rugged backdrop. “There’s the scope of a real western, but it’s also a quite intimate story,” says Nelson, “much of which takes place either in or just outside of a very small house. It’s dealing with big ideas with a very small cast and a driving relationship between a father and son.” But “there are other aspects”, he says, “that make this a western very much of our time”.

The obvious one being its reflection of pandemic isolation. Nelson relates his character’s attempts to protect (“or, as it were, quarantine”) himself and his son from the “violence and corruption of the modern world” to our own disconnectedness over the past two years. “The film was conceived before the outbreak, but it resonates with Covid in a really interesting way,” he explains.

The pandemic afforded Nelson half a year to prepare for the role, studying the real Old West figure upon whom Old Henry was (somewhat speculatively) based – although it sounds a little intense. “It was a methodical process that eventually involved hours on the phone every day with [writer-director Potsy Ponciroli] as he worked through the script,” Nelson explains. Though clearly it’s paid off: Nelson turns in one of the best performances of his career, a dormant volcano of suppressed urges and hidden darkness.

Nelson did not start adopting this sort of process until relatively late in his career, when, about a decade ago, he started to reconsider everything he knew about acting. “I really wish I could go back and play my first 30 roles over again,” he says. “Maybe even the first 50. At a certain point, I became complacent.”

A series of films he did with James Franco (Child of God, As I Lay Dying and The Sound and the Fury) proved the turning point for his process, away from the pomp and excess of big budget movies. “The crew, the cast, the on-set accommodations, the pay – was all really minimal,” says Nelson. “It kind of purified the way I started to look at what I was doing. I didn’t have the luxury to reside in the old approach I had. Because with everything stripped away, it exposed a lot of the shallowness in some of my choices.”

The other catalyst for change, he says, was working alongside Daniel Day Lewis on Steven Spielberg’s Lincoln. “Just being around his absolutely molecular transformation into that character and starting to get some insight into the amount of work he was putting into that… I said to myself, ‘I’ve been wasting these opportunities that luck has afforded me.’”

Among the opportunities to have fallen Nelson’s way down the years are collaborations with Terrence Malick, Steven Spielberg (twice) and Ang Lee, as well as several directorial efforts of his own. But he remains selective when agreeing to roles. “I’ve been offered plenty of parts where I’ve felt, ‘Well, this will be really exciting to try but you can get somebody better,’” he says. “Recently, I was offered a character who was hearing impaired and spends the film either signing, or speaking in the manner of many who are hearing impaired. And I thought, ‘What an interesting challenge this would be.’ But I would be doing the movie a disservice if I took the role.

“I’ve been offered flamboyantly gay men in the past,” he adds. “I’ve always felt that would seem silly coming from me. It’s not that I won’t play gay, but flamboyantly gay… you can get somebody who can more naturally find that. So it’s more about trying to restrain myself from playing roles in which I don’t belong.”

Fortunately for Nelson, there are plenty of roles in which he does belong, even if few of them offer as generous a showcase as Old Henry. He has just appeared in a crucial one-scene capacity in Guillermo del Toro’s Nightmare Alley; he reunites with the filmmaker later this year for the animated Pinocchio, in which Nelson voices The Coachman (and gets to sing). He’s keen to work with Ridley Scott, Julia Ducournau, Gaspar Noe and Martin Scorsese (among many, many others) but he holds out hope for his dream project, a screen adaptation of his play about Socrates, which he wants to be filmed in the style of Stanley Kubrick’s Barry Lyndon, meaning lots of natural light, “delving into what Athens was really like in 400 BC”.

If Nelson is a smart man who’s made his name playing not-so-smart characters, he is careful to avoid patronising them. “With Delmar, rather than think he was stupid, what I thought instead was he’s innocent of knowledge,” he says. “If you watch this movie, what I hope you’ll see is somebody in pursuit of being smarter. I think that the way you humanise characters is just by loving them as an actor. Not looking down on them.”

Call it tikkun olam. Call it just basic decency. But Nelson is an actor who is earning his right to be here, one deeply human role at a time. 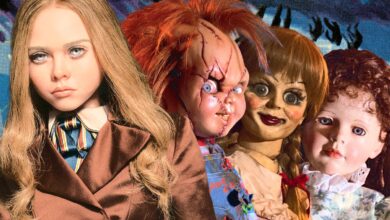 Knives and dolls: M3GAN, Chucky and my chronic fear of three-foot, plastic evil

Avatar 2 logo causes headaches despite fixing ridiculed papyrus font: ‘I knew there was something off!’