​​A “wonderful, creative and kind” three-year-old boy who died in hospital almost a week after a crash on the M4 motorway near Newport that killed his sister has been named as Jayden-Lee Lucas.

The boy, from Tredegar, had been returning from a birthday party at around 1.45pm on 5 February when the car he and his family were travelling in collided with a van.

Jayden-Lee and his older sister, four-year-old Gracie-Ann Wheaton, were transferred to the intensive care unit (ICU) at University Hospital of Wales in Cardiff.

Gracie-Ann suffered a stroke and then a cardiac arrest due to the severity of her injuries and died the following day at around 5am.

Jayden-Lee died on Friday at 4.30pm, his family confirmed.

The children’s parents, a man and a woman, were also taken to hospital. Their mother continues to receive treatment.

Jamie Lucas, 19, the boy’s cousin, described him as “wonderful, creative and a kind soul”.

In a note on the GoFundMe page set up for the family, Mr Lucas said: “Unfortunately, after 5 days of fighting, Jayden-Lee has passed away. On Friday 11th Feb 2022 at 16:20, Jayden-Lee reunited with his sister, Gracie-Ann.”

In an earlier tribute to Gracie-Ann, he said: “I’m just trying to wrap my head around the fact that she’s gone; it’s hard to believe.

“She was so young. She had a bright future ahead of her. She was such a wonderful child.

“I’m just lost for words really. How she was returning from a birthday party and all of a sudden she’s gone.”

“That’s why it’s affected everyone, because she was such a lovely little girl,” he said.

“She had loads of friends and was very polite. The family had been for a day-out and went to kids party in town in the morning.

The crash happened on the westbound carriageway between junctions 28 and 29, prompting a huge emergency services response and causing the route to be closed for around seven hours.

He has been remanded into custody pending a hearing at Newport Crown Court on 21 February.

Anyone with dashcam footage of the collision, or any information that could help the investigation, is asked to call Gwent Police on 101 and quote 2200041245. 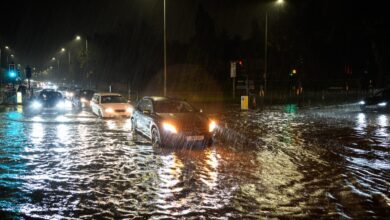 UK weather: Thunderstorms on way after London hit by half a month’s rainfall in one night 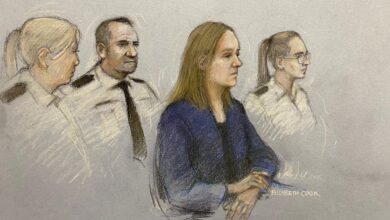 Lucy Letby trial: Collapses of baby girl allegedly murdered by nurse came ‘out of the blue’