Canadian police have moved in to remove truckers from a blockade at one the busiest border crossings to the US.

It comes a day after an Ontario court granted an injunction to bring the barricade, which has now entered its sixth day, at the Ambassador Bridge to an end.

Protesters remained overnight despite new warnings to end the blockade that has disrupted the flow of goods between the two countries and forced the auto industry on both sides to roll back production.

A city bus and a school bus arrived at the scene on Saturday morning, before police moved in “formation” towards them, according to local media. One of the protesters used a megaphone to alert others that police were coming for the demonstrators, who are protesting against Canada’s Covid mandates and restrictions.

There is also an outpouring of fury towards Canada’s PM Justin Trudeau, who spoke to US president Joe Biden about the situation on Friday.

“The Windsor Police & its policing partners have commenced enforcement at and near the Ambassador Bridge. We urge all demonstrators to act lawfully & peacefully. Commuters are still being asked to avoid the areas affected by the demonstrations at this time,” police tweeted.

On Friday, Ontario Premier Doug Ford declared a state of emergency in the province that will allow his cabinet to impose $100,000 (£73,732) fines and up to one year in jail as punishments against people who continue to illegally block roads, bridges, walkways and other critical infrastructure.

However, the deadline came and went.Windsor police immediately warned that anyone blocking the streets could be subject to arrest and their vehicles could be seized. The news was met earlier with defiance by protesters. 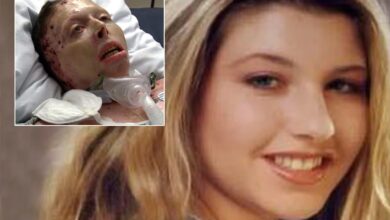 She was burned alive by the man she loved. Then Judy Malinowski testified at her own murder trial