Forecasters have warned that heavy snow showers could batter northern Scotland this week as temperatures across the UK are set to fall.

The Met Office today issued a yellow weather warning covering the north of Scotland on Wednesday. The forecaster said that road and rail services could be impacted by the snow.

The Met Office said: “Showers will fall as snow to low levels on Wednesday.

“Accumulations of 2-5 cm are possible at lower levels, with 5-10 cm above 200 metres, with some drifting and blizzard conditions in the strong northerly winds.”

The weather warning is in place all day on Wednesday and covers Central, Tayside & Fife, Grampian, Highlands & Eilean Siar and Orkney & Shetland.

Met Office meteorologist Marc Petagna, said: “We are set to see some fairly chilly conditions across the UK in the next few days.

“Yes there will be some sunshine, but equally a fair few showers and an increase in the chance of snow, particularly across the north of the UK as we head through the coming week as those winds start to swing into a cold northerly direction.”

The forecaster warned those affected to expect travel disruption as some roads and railways are likely to be affected with longer journey times by road, bus and train services.

Sunday will be a cloudier day than Saturday and there will be patches of rain in the north-east and east of the UK.

Temperatures will be between 5-8C, which are “lower than they should be for the time of year”, Mr Petagna added. A strong easterly wind will make it will colder in some places.

Rather cloudy for many although some sunny intervals, best in the northwest. Further scattered showers especially in eastern areas north of The Wash. Feeling chilly in the northeasterly breeze.

Cold easterly winds with some showers at first before starting to turn even colder from the north on Wednesday with some heavy snow showers for northern Scotland and widespread frosts. 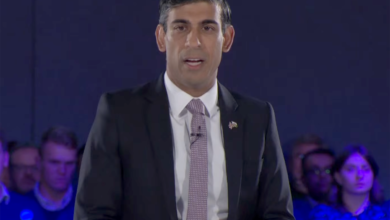