Nato is planning the deployment of new combat units to central and southeastern Europe, as it accused Russia of failing to pull troops back from the border with Ukraine.

The move – which could see four “battlegroups” totalling 4,000 troops in Romania, Bulgaria, Hungary and Slovakia – would represent the biggest shift in the alliance’s military posture since it set up operations in the Baltic states and Poland in the wake of Russia’s 2014 annexation of Crimea.

Separately, the UK is sending an additional 900 personnel with tanks and armoured vehicles to bolster its existing mission in Estonia as tensions mount over Vladimir Putin’s intentions towards Ukraine.

Moscow had indicated it was pulling troops back after joint military exercises with Belarus and was willing to continue diplomatic discussions over its demand for Ukrainian membership of Nato to be permanently ruled out.

But Nato’s secretary general, Jens Stoltenberg, said that, far from withdrawing a force estimated by the US president, Joe Biden, at up to 150,000 men, satellite imagery suggested that Mr Putin had in fact moved his troops to more offensive positions. Ukrainian authorities also reported cyberattacks on official websites.

“So far we do not see any sign of de-escalation on the ground – no withdrawals of troops or equipment,” said Mr Stoltenberg following an emergency meeting of alliance defence ministers in Brussels. “Russia maintains a massive invasion force ready to attack.”

Western intelligence briefings that an invasion of Ukraine could come on Wednesday were mocked by the Russian foreign ministry spokesperson Maria Zakharova.

“To the regret of many western media, the war again failed to start,” Ms Zakharova told reporters. “Fighting has erupted on their pages, but it has no relation to reality.”

In a Facebook post, she asked the “mass media of disinformation” in the west “to reveal the schedule of our ‘invasions’ for the upcoming year. I’d like to plan my vacations.” Mr Stoltenberg said that it was “not too late for Russia to step back from the brink of conflict and choose the path of peace”.

But he said that Nato must face up to a “new normal” in which Moscow is ready to use force to contest the fundamental principles that have underpinned European security for decades.

As a consequence, he said, ministers had decided to “develop options to further strengthen Nato’s deterrence and defence, including to establish new Nato battlegroups in central and eastern and southeastern Europe”. France has already volunteered to lead one group in Romania.

Mr Stoltenberg insisted the alliance’s actions were defensive and that “Nato is not a threat to Russia”.

But a senior western official said that intelligence showed Russian military exercises in the vicinity of Ukraine remain in an active phase and could intensify during the remainder of February.

“We are at a peak period where the exercises that the Russians had announced are in their active phases,” the official said.

There are “no credible signs at this point that there will be any kind of military de-escalation”, said the official, adding that Russia could now attack Ukraine “with essentially no, or little to no, warning”.

The British defence secretary, Ben Wallace, who attended the Brussels meeting, said the UK was bolstering the Nato response with additional troops, as well as deploying naval and air power in the region.

The Royal Welsh battlegroup of about 900 troops began moving from bases in Germany and Britain to join a similarly sized detachment of UK personnel already in Estonia under the long-standing Operation Cabrit mission. A further 1,000 servicemen and women remain on standby in the UK, while 350 have taken up their posting in Poland. 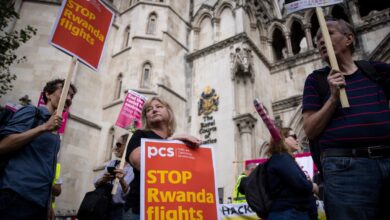 Elle Edwards killing: Police chief warns gang families ‘you may have blood on your hands too’