A fourth gas leak has been found at the damaged Nord Stream pipelines in the Baltic Sea, Sweden has said.

The country’s coastguard confirmed the development to the Svenska Dagbladet newspaper.

“Two of these four are in Sweden’s exclusive economic zone,” coast guard spokesperson Jenny Larsson said on Wednesday. The other two are near Danish waters.

After they were first detected on Monday, the EU has said the leaks are “highly suspicious”, saying they are likely to have been caused by “sabotage”.

Swedish prime minister Magdalena Andersson said only a large explosive device could have caused the damage to the pipelines carrying gas from Russia to Germany..

Some EU officials have suggested that Russia could be responsible for the attacks, as they stand to gain from energy turmoil in Europe.

The Kremlin has dismissed accusations of sabotage as “predictable, stupid and absurd”, blaming “international terrorism” instead.

The EU has warned that there could be more attacks on vulnerable energy infrastructure, with Norway saying it will increase its military presence at its installations.

‘All this suffering because of a madman’: Putin’s forces intensify attacks in bid to seize the Donbas

Brave Ukrainian woman tells Russian soldier: ‘Put sunflower seeds in your pocket so they grow when you die’ 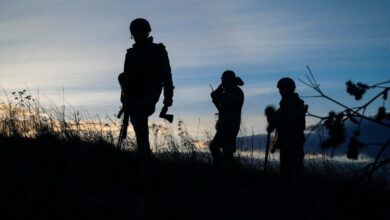