In just over five weeks, either Liz Truss or Rishi Sunak will be announced as the new Conservative leader and Britain’s next prime minister. As Boris Johnson enjoys his remaining days in No 10, the two candidates will be frantically zig-zagging across the country participating in head-to-head debates and a dozen official hustings events organised by the party.

With online voting commencing on Monday and postal ballots landing on members’ doormats by Friday, the foreign secretary and former chancellor will have until voting closes at 5pm on 2 September to win over the party faithful. But who are the members voting for the next prime minister?

Given that political parties are under no obligation to publish membership data, it is difficult to determine the exact number of eligible voters in the 2022 contest.

The party’s former chairman, Brandon Lewis, revealed in 2019 that fee-paying members had grown from 124,000 in 2018 to 160,000 — or 0.34 per cent of the voting public. A year later, his successor Amanda Milling said the figure had hit 200,000. But there has been no update since, suggesting there has been no further surge in people signing up to pay subs.

Conservative Campaign Headquarters (CCHQ) is yet to provide an up-to-date figure for the current contest and has only gone as far to suggest the number exceeds the 160,000 members eligible in the 2019 Tory leadership race when Mr Johnson was elected leader.

More is known about the demographics of the membership, however, largely thanks to the research of academics on the Queen Mary University of London (QMUL) and Sussex University Party Members’ Project.

The most recent data from January shows they are more likely to be male (63 per cent), aged over 50 (58 per cent) and predominately belonging to the highest socioeconomic group. Similar to other major political parties at Westminster, members are overwhelmingly white – 96 per cent.

They are also more concentrated in London and the south of England, with 56 per cent living in these areas. It’s a marked contrast to 18 per cent in Wales and the Midlands, 20 per cent in the north and just six per cent in Scotland.

Speaking last week, Angela Rayner, Labour’s deputy leader, described the contest to replace Mr Johnson as a “warped pantomime to win over the unrepresentative Tory selectorate” while Mick Lynch – the straight-talking general secretary of the Rail, Maritime and Transport workers’ union (RMT) – offered his view on the BBC, describing the vote of 160,000 Conservative members for the next occupant of No 10 as “some kind of Surrey golf club scenario”.

The Conservative peer and elections expert Lord Hayward found the characterisation amusing, but made one observation: “I’ve never chaired a Tory selection at a golf club, but I have at a rugby club.”

Asked to describe an average Tory member, he told The Independent: “Retired managerial with a few oddballs tacked on.”

Former cabinet minister Simon Hart, a supporter of Mr Sunak, said it was a “reasonable assumption that Tory members are to the right of the electorate as a whole, but I think they are more interested in the national position and who can deliver on that”.

He added: “The real measurement, especially in marginal seats like mine, is ‘Which candidate is going to have the best chance of holding or winning this seat at the election?’”

“They will be looking for who comes up with the best policies for the nation, rather than just what is most attractive to Tory members. Members are not necessarily looking for somebody absolutely reflecting their views back to them so much as somebody who can get Tory MPs and councillors elected.”

As well as examining demographics, a 2018 study on political party members by the Mile End Institute at QMUL also examined ideology and policies. It found that 54 per cent of Tory members agreed, or strongly agreed, that the death penalty for the most serious crimes is the most appropriate sentence, compared with 9 per cent of Labour members.

A huge majority – 77 per cent – believed that young people do not have enough respect for “traditional British values”, while just 11 per cent at the time said austerity had gone too far, or much too far. In contrast, 98 per cent of Labour’s fee-paying members said the cuts to public service had gone too far, as did 75 per cent of members of the Liberal Democrats. Unsurprisingly, over three-quarters of Tory members voted Leave at the EU referendum in 2016.

Professor Tim Bale, one of the academics behind the research, told The Independent that some people “overdo their enthusiasm for a ‘war on woke’”, with members far more concerned with the numbers of police on the streets, giving criminals longer sentences and Channel crossings.

He said that around 30 per cent of Tory members have some kind of mortgage, adding: “I think, for example, the idea that interest rates might go up to seven per cent would worry a fair few of them”. It is perhaps no surprise that Mr Sunak has sought to highlight this issue during the campaign.

Professor Bale has also documented the reading habits of members and found that in 2017 just 11 per cent did not read a newspaper, with 33 per cent reading The Daily Telegraph , 21 per cent opting for The Times and 17 per cent for the Daily Mail. 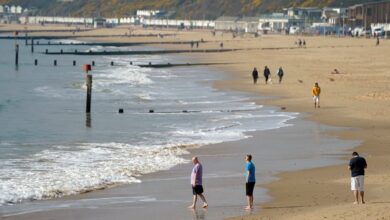 UK weather: Temperatures to rise to 20C ahead of Easter weekend