Russia has attacked power stations and other critical infrastructure in Ukraine, plunging cities and towns into darkness, in response to a swift counter-offensive by Kyiv’s forces that has driven Moscow’s troops out of swathes of territory.

The bombardment ignited a massive fire at a power station on the western outskirts of Kharkiv, killing at least one person and leaving Ukraine’s second largest city without power in Sunday night.

Several areas of Kharkiv, in northeast Ukraine, have been hit with widespread blackouts and cuts in water supply due to Russian attacks on infrastructure sites, the region’s governor said.

“The [Russian] occupiers have struck critical infrastructure in the city and region of Kharkiv,” Olegh Synehubov wrote on Telegram.

“In several population centres, there are no electrical or water supplies. Fires have broken out where these strikes occurred and emergency crews … are containing the blazes.”

The blackouts come after Ukrainian forces recaptured dozens of Russian-occupied areas in the Kharkiv region, which forced Moscow to withdraw its troops to stop them from being surrounded, leaving behind a significant number of weapons and munitions.

Mr Zelensky said on Twitter that Donetsk had also lost power, and partial blackouts had occurred in the Zaporizhzhia, Dnipropetrovsk and Sumy regions.

“Some towns and communities are without power. The Russians have hit energy infrastructure. They are unable to reconcile themselves to defeats on the battlefield,” the Dnipropetrovsk region’s governor Valentyn Reznichenko wrote on Telegram.

“We will manage. All services are in operation. We will restore everything as quickly as possible.”

The head of the eastern Sumy region, Dmytro Zhvytsky, said cuts to electricity and water supplies had impacted at least 135 towns and villages.

The deliberate targeting of essential civilian services is a violation of international law. Karim Khan, chief prosecutor at the International Criminal Court (ICC), has previously said he would open an investigation into alleged war crimes Russia has committed during its invasion of Ukraine.

Kyiv’s recent counter-offensive to reclaim Russia-occupied areas in the Kharkiv region has forced Moscow to withdraw its troops to prevent them from being surrounded, leaving behind significant numbers of weapons and munitions in a hasty flight as the war marked its 200th day on Sunday.

He said Ukrainian troops are only 30 miles from the Russian border.

The UK Ministry of Defence said on Twitter: “Over the last 24 hours, Ukrainian forces have continued to make significant gains in the Kharkiv region.

“Russia has likely withdrawn units from the area, but fighting continues around the strategically important cities of Kupiansk and Izium.”

A jubilant Mr Zelensky mocked Moscow in a video address on Saturday night, saying “the Russian army in these days is demonstrating the best that it can do, showing its back”.

The cutting of fuel or electricity and water supplies to the civilian population violates the fundamental principals of the laws of war. Karim Khan, chief prosecutor at the International Criminal Court (ICC), has previously said he would open an investigation into alleged war crimes Russia has committed during its invasion of Ukraine. 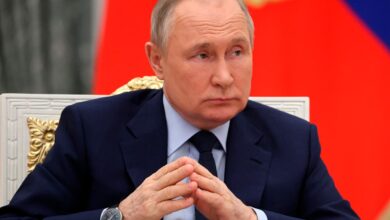