A police officer charged with assaulting a teenage football fan after being filmed beating him with a baton has been found dead just weeks before his trial.

PC William Sampson, 27, was filmed running at the fan and leaving him bloodied after hitting him during a fracas after a clash between Barnsley and Sheffield Wednesday.

The teen was sent crashing to the ground and was taken to hospital with head injuries, sparking a furious backlash and prompting a probe from the police watchdog.

PC Sampson, known as ‘Billy’, was due to face trial in March after pleading not guilty to unlawful and malicious wounding at a previous court hearing.

But South Yorkshire Police has confirmed he was found dead at his home on Friday afternoon. He had been placed on restricted duties pending the outcome of his trial.

A spokesperson for the force said: “We are incredibly saddened by news of Billy’s death.

“Our thoughts remain with Billy’s family and loved ones and they will be offered our full support.”

Steve Kent, chairman of the South Yorkshire branch of the Police Federation, said: “On behalf of colleagues, all of our thoughts are with Billy’s family, friends and colleagues at this time.”

Paying tribute online, Sadie Tummon said: “RIP Billy you were a good friend to me from a young age throughout my childhood and school. You will be missed.”

Andrea Campbell added: “So very sad, I remember Billy as a little boy, my daughter’s friend in Dobcroft School.

“My thoughts are with his lovely mum, his brothers and the rest of his family. Truly heartbreaking.”

Shocking video footage of the incident shows Sampson charged towards the teen before whacking him over the head with his baton.

A woman, reported to be the lad’s mum, can be heard on the video screaming, “what have you done to my son?” as blood pours down his face.

The clash happened at the end of the South Yorkshire Derby between Sheffield Wednesday and Barnsley at Oakwell on February 8 2020, which ended 1-1.

A probe was launched by the Independent Office for Police Conduct (IOPC) after South Yorkshire Police faced a backlash online for the “aggressive” response.

An IOPC spokeswoman said it completed its investigation in August that year and referred a file to the Crown Prosecution Service (CPS), which made the decision to charge Sampson.

Officers were monitoring fans at the time of the incident as they made their way from the football ground towards the transport interchange in the town.

Mobile phone footage showed the officer striking the teen over the head, leaving him with a gaping head wound and covered in blood, and was shared online.

When the probe was launched, IOPC Regional Director David Ford said: “We understand why the images that were circulated caused considerable public concern. 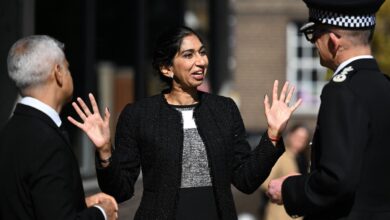