It was the end for Amir Khan late on Saturday night in Manchester when 19,000 people attended his boxing wake.

It should probably also be a triumphant end for Kell Brook after six one-sided and painful rounds of domination in their clash of veterans.

It was one of the most emotional fights to cover that I can remember; two men with a combined history of glory, too much pride and spite and, by about 10.40pm on Saturday night, nowhere to go in a ring shaking with anticipation. And, perhaps just a bit of dread.

The simple truth of the fight, which took over 10 years to make and six minutes to sell out, is that Amir Khan had absolutely nothing left but the memory of his great nights and his enormous heart. In the ring, under fire, desperate and knowing the end long, long before it happened, he took the final beating of his amazing boxing career like an old hero, a warrior one last time. It was the only certainty in a fight of unknowns. It was both a horror and privilege to watch from six feet away.

“It’s not there anymore, it’s gone,” he said at midnight during a grim moment of reflection as he signed all of the medical papers after the last post-fight inspection of his life. His body and face red and bruised, dark lumps forming all over and yet he still tried to smile. The boy from the Athens Olympics, the kid was finished. It has been 18 years as a pro, 40 fights, 10world title fights, dozens of massive nights in packed arenas and at 35, sore and a bit broken, he is at last done with the game that gave him fame and riches.

Nobody in the Khan business or the boxing business was prepared for the version of Khan that entered the ring; it is harsh, but he had no resistance to any of Brook’s punches. None. It’s not a criticism, it’s a fact. I doubt Khan was even aware of the decline; it happens that way, the end of a career.

In the ring, nearly an hour before Khan sat in sadness under the doctor’s eyes, Brook had been simply too strong, too powerful and accurate in a fight where the smart thinkers in our game had been flipping coins all week. Brook walked through Khan’s punches, thumped away, laughed, smiled, cut Khan off in a big ring that shrunk as the seconds ticked. Brook looked like a man travelling in the opposite direction to the old road Khan was stumbling down. The end was clear after 10 seconds of the opening round and it finished finally after five seconds of the sixth. It was over long before the end was official.

“I’m back, I’m back – I told you I would stop him,” an ecstatic Brook said in his dressing room. Khan made Brook look sensational.

The fight is easy to recall, but was so much harder to predict. Khan had tried to move, tried his speed, but by the end of the first it was his heart and instincts that kept him up. Brook was smiling at the bell, knowing the fight was over after just three minutes. It was desperate to witness; we knew Khan would not go easily – he never does – and we also knew just how vicious Brook can be.

Brook remained calm, cutting off the ring, setting up shots, calculating just how much he had in the tank and how fast Khan’s reserves were evaporating. Khan tried every single little thing that he has picked up in his boxing life; he hit, he moved, he held, he shook his head and slowly and inevitably the fight left him and Brook started to hurt him. Brook was in no hurry and it was massively entertaining in that dark contradictory way that boxing can be.

At the end of the fifth, Khan was unsteady as he walked back to his latest team in the corner and as he slumped to the stall, it was obvious that his night was over. There are corners that would have yanked him out at that point. They never did, they sent him out for the sixth. Brook connected with a shuddering jab to the face on the bell, Khan’s legs danced, Brook pounced and the referee, Victor Loughlin, closed in, watched from 12 inches away and then stopped it after 51 seconds. Mercy and mayhem in Manchester. And despair and utter delight.

The pair embraced in the ring after a decade of hate and resentment. Their dispute was settled, but there will forever be a lively debate about what would have happened had they met eight or so years ago. The fight on Saturday was most definitely not between two men in anything like their primes. That is fine, there was no con; the fans knew the deal, it was bad blood, old blood and the night was always going to be about sacrifices. The fight was a journey to discover which man had the most left: Brook was a clear winner, Khan the clear loser on the night. However, this is February of 2022, they are both 35, have now been in 82 fights and Saturday’s end should not be considered as the definitive result in any fantasy fight between the pair back in 2014. That’s gone forever and we will all have to settle for the beating we witnessed. And not the fight we wanted so badly once upon a time.

There is bold talk of Brook fighting younger and fresher men; Brook also talked about walking away. He must now make the right decision, the safest decision and avoid becoming the man he dismantled in the Manchester ring. It’s a thin line between fighting a ghost and being the ghost in my brutal business.

And Khan will let his bruising heal and hopefully find some comfort in the glorious memories he left us. He should never chase any boxing dreams again; Kell might just still be dreaming.

They delivered something special in the ring on Saturday night in the twilight of two very fine careers. It was not always pleasant to watch, but it was truly impossible to turn away.

‘I take out Canelo in the same way’: Jake Paul reacts to Dmitry Bivol’s victory over Alvarez 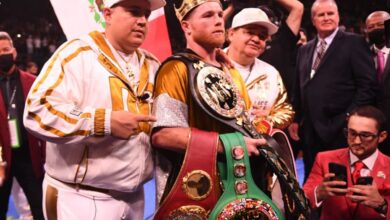 ‘That is news to me’: Tyson Fury offers update on retirement plans

‘I ain’t got no money’: Mike Tyson says he wants $1bn to fight Jake Paul