A Catholic boys school in Massachusetts has been ordered to stop calling itself “Catholic” after school leaders refused to comply with demands to take down Pride and Black Lives Matter flags.

The Nativity School of Worcester, Massachusetts, had flown both flags for “a period of time” in celebration and acknowledgement of its communities.

However, on Thursday, bishop Robert J. McManus told the school it “may no longer use the title ‘Catholic’ to describe itself” in a decree.

The Bishop of the Diocese of Worcester said flying both flags “sends a mixed, confusing and scandalous message to the public about the (Catholic) Church’s stance on these important moral and social issues.”

He also claimed that “these symbols (flags) embody specific agendas or ideologies (that) contradict Catholic social and moral teaching”.

Thomas McKenney, the school’s president, said in a statement that the bishop’s decision would be fought against and that “inclusion is rooted in Catholic teaching.”

“Nativity will seek to appeal the decision of the Diocese to remove our Catholic identity through the appropriate channels provided by the Church in circumstances like this,” said Mr McKenney.

“As a multicultural school, the flags represent the inclusion and respect of all people,” Mr McKenney continued. “These flags simply state that all are welcome at Nativity and this value of inclusion is rooted in Catholic teaching.”

Nativity alumni and LGBT+ campaigner Guillermo Creamer Jr told NBC Boston on Thursday that the bishop’s decision was “absurd”, and said in comments to the New York Post that the move was also “backwards”.

“We are hearing more and more Catholic communities embrace inclusivity, and I think to hear a Bishop try and promote the opposite of that is just absurd,” he said. “It’s very difficult to be an openly gay alumnus and to hear that the Bishop is ripping away a Catholic status for an institution that’s truly done nothing but good in our community.

Nativity was founded in 2003 as an “independent, Catholic, Jesuit middle school that provides a quality, tuition-free education to boys from under-resourced communities”, its website says. It is the only institution of its type in central Massachusetts.

According to Mr McKenney, the school “will continue to display the flags “to give visible witness to the school’s solidarity with our students, families, and their communities.”

Mr McManus claimed in his decree that while he believed in the notion that “all lives matter”, he did not support the Black Lives Matter movement.

Both the anti-racism movement and LGBT+ campaigners contradict “Catholic social teaching on the importance and role of the nuclear family”, the bishop claimed.

That was in reference to a now deleted claim from the Black Lives Matter movement’s website attacking the “Western-prescribed nuclear family structure”, and the fact that the Catholic church does not allow same sex marriage.

The incident comes amid a rise in anti-LGBT+ rhetoric in the US, with US President Joe Biden this week signing an executive order to enshrine protections for LGBT+ people into law. 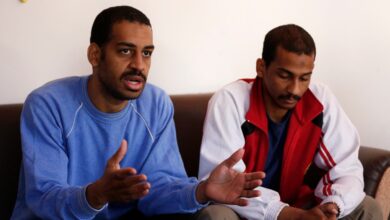 Isis on trial: Families of victims hope for justice as landmark case of Isis ‘Beatle’ begins in US court 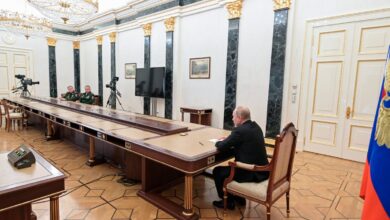