Chelsea were forced to go all the way, but finally get them all in. The European champions became the world champions, and just the fifth club to win every major trophy, after Kai Havertz again won them a major final.

This was through a contentious penalty against Palmeiras that was probably the right decision, but again raises the possibility that the rule is wrong. Chelsea will fairly argue that it was a similarly harsh call on Thiago Silva that forced them all the way to extra-time in the first place, but the details won’t matter to history.

Neither will an unconvincing display, that will raise questions about the remainder of this season, as well as how much this tournament will add to their fitness issues. It hasn’t quite been the jaunt to the sun that some thought. It did end in celebration, though, which has a transformative effect all of its own.

Thomas Tuchel has some unique feats of his own in the storied modern history of this club. He has delivered another trophy, and one the club wanted much more than outsiders may believe.

They probably didn’t want it as much as Palmeiras, though, something which could be seen in the furious reaction to the penalty as well as the scenes at the end of the game. They were crestfallen, none more so than Luan. The defender, who had conceded the penalty for handball, was shown a red card six minutes into added time for fouling a clean-through Havertz, and left the field in tears. He and his teammates had put everything into this, but that in turn sapped something from a poor match.

Chelsea have had many of their own issues in the last few months, but much of this game’s raggedness was down to Palmeiras’s approach. Under immense pressure to win due to the importance of this game in Brazil, they were more than willing to make it tight and tense, and look to hit Tuchel’s side on the break.

That was effective, but not exactly appealing. It made the game close to unwatchable for around an hour, the attrition in the middle only broken by the occasional long shot or speculative punt. Thiago Silva tried one from distance for Chelsea, Dudu responded for Palmeiras.

The Brazilian striker actually seemed better further away from goal. In one of Palmeiras’s few constructive pieces of play, Dudu was sent through after smart work from the highly-rated Raphael Veiga, only to skew the shot well wide.

It was a strange finish, and probably would have been an undeserved lead. Chelsea did have the better of the play, and around two-thirds of the possession, but couldn’t really fashion superior chances. Again, it was difficult to say whether that was down to the opposition or their own recent struggles in attack.

It didn’t help when Mason Mount went off injured before half-time, or that there remains the lack of a real link between Havertz and Romelu Lukaku. The German did look dangerous on the rare occasions when he got to surge forward, but Lukaku was often crowded out.

Palmeiras’s canny coach Abel Ferreira had created a forceful defensive phalanx but Chelsea eventually managed to break it open in the most reductive way.

For all the sophistication of their manager and the international make-up of their squad, on this global stage, they scored the most English of goals 10 minutes after the break. It was a classic No 9’s header from wingplay, albeit crafted by a Croatian and finished by a Belgian.

Finally seeing an opening, Mateo Kovacic surged forward in the way that has seen move onto another level as a player at Chelsea, before feeding Callum Hudson-Odoi. He steadied himself before sending over the most inviting of crosses, allowing Lukaku to thunder in a header.

It was his second goal in successive games, and should have been a second successive match-winner, but Chelsea just aren’t as solid as they were in the first few months of Tuchel’s tenure.

This did admittedly require a relatively loose decision on 64 minutes, and with another Palmeiras cross bouncing around the box, Silva went up for a header, only to leave his hand trailing. He may well have intended to do that, he may well have been forced by the awkward nature of the 50-50.

Either way, the ball hit it, and Australian referee Chris Beath went to VAR. The penalty was given and Veiga took it superbly.

Palmeiras had an equaliser that may have deserved for their effort and efficiency, if not necessarily for the balance of play.

Chelsea still weren’t convincing, though. They still didn’t have the energy that Jorginho said would return with Tuchel’s arrival, so the manager tried to jolt them into action.

Lukaku and Kovacic were brought off, Timo Werner and Saul Niguez came on. The ball did then come back off the bar from one Pulisic run. 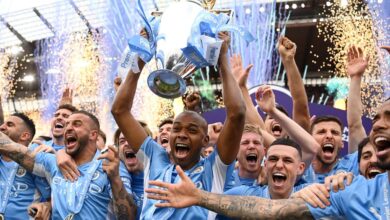 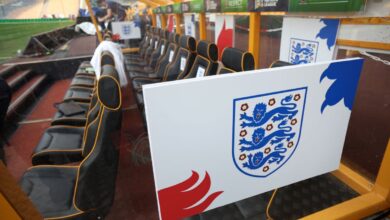 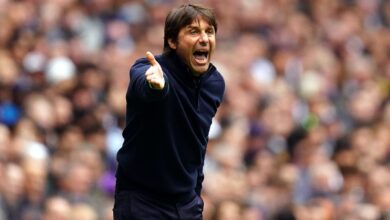 Antonio Conte set to remain in charge of Tottenham