SmartWater technology normally designed to catch burglars and thieves has been used to jail a domestic abuser for the first time.

A woman in Wakefield, West Yorkshire, was given a canister of the liquid as part of an initiative to prevent and detect repeat domestic abusers.

In an incident earlier this month, the perpetrator visited the victim’s address in breach of a non-molestation order.

She was able to spray him with the SmartWater solution and its unique tag was found on his clothing when he was arrested.

West Yorkshire Police said the man was charged and convicted of breaching a non-molestation order and harassment.

He was jailed for 24 weeks and a two year restraining order has been put in place, the force said.

Superintendent Lee Berry, of West Yorkshire Police’s Safeguarding Central Governance Unit, said: “No-one should have to live in fear in their own home.

“We are always looking at new ways to reduce and detect domestic abuse and this Wakefield Community Safety Partnership-funded initiative is an innovative approach to protecting victims and ensuring offenders are brought to justice.

“The victim in this case was visited by officers from Wakefield Adult Safeguarding Unit and she told them how having the SmartTag canister made her feel very protected and much more safe and how she would recommend it to other victims.”

He added: “I would urge anyone who has been the victim of domestic abuse – whether that’s physical abuse, controlling or coercive behaviour, harassment or stalking – to please report it to the police so that we can help you to feel safe again.”

SmartWater is a liquid containing a unique code that can be traced back to the person who sprays it.

It is invisible to the naked eye but glows under UV light.

The product is usually sprayed on items of high value in people’s homes.

Some streets in neighbourhoods across the country display SmartWater signs on lamp posts and other fixtures to deter would-be burglars. 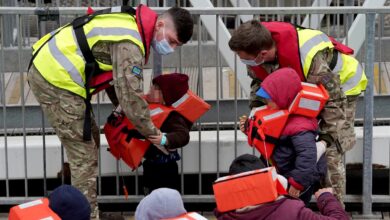 English Channel: More than 7,000 people have made deadly crossing this year, figures show

Government rolls out ‘guidance’ on teaching racism in schools