Halfway through the film She Said, the New York Times journalist Megan Twohey, played by Carey Mulligan, screams in a man’s face. She is in a bar with her reporting partner, Jodi Kantor (Zoe Kazan), and editor, Rebecca Corbett (Patricia Clarkson); the trio have congregated to discuss their investigation into Harvey Weinstein. The confrontation happens after the man, who is drunk, hits on Megan.

“I have never done that,” says Twohey, smiling. “But I have had outbursts of that kind over the years, stretching back to when I was a kid and beat up a neighborhood bully for taunting me and my friends.” She pauses. “It would be naive for people to think that we, as journalists, could immerse ourselves in the outrageous prevalence of sexual abuse and not feel anger. I just don’t think that’s realistic.”

By now, the story of Twohey and Kantor’s reporting is well known. In 2017, the duo began looking into allegations of sexual misconduct against a Hollywood heavyweight. The result was a Pulitzer Prize-winning investigation that turned #MeToo into a viral movement emboldening survivors of sexual violence to speak out. It also held perpetrators to account and in some cases, like Weinstein, put them in prison.

But the journey was complex, as detailed in Twohey and Kantor’s 2018 book that forms the basis for a film drama of the same name. Directed by Maria Schrader (whose previous credits include Emmy award-winning miniseries Unorthodox), She Said is ostensibly about the downfall of one of the industry’s most powerful men. But really it’s a story about women. Not just Twohey and Kantor and the lengths they went to in order to expose Weinstein, but also the survivors they spoke to and convinced to go on the record.

Thematically, the film traces the contours of old-style journalism films such as Spotlight (about child sex abuse in the Catholic Church) and All the President’s Men (about the Watergate scandal). Pacy, tense, and brimming with high-stakes workplace drama (The New York Times allowed the filmmakers to use its actual newsroom), She Said does justice to the rigour required of investigative reporting. Some critics, however, have pointed out that the film lacks emotional depth and fails to scratch the surface of the issues it examines. This could simply be down to the subject matter; there’s only so much detail survivors of sexual violence are comfortable sharing with the world. But it could also be a conscious filmmaking decision.

“We set some rules,” says Schrader. “I’m absolutely certain that I do not want to be a person who adds another rape scene to the world. So we stuck to our source material, which was the factual reporting by Megan and Jodi.” It was a good choice – and you hardly need to see the assaults to get a sense of the trauma they have caused. Flashbacks provide the necessary context, and we hear how each of the women was personally and professionally impacted after rebuffing Weinstein’s advances. The actor Ashley Judd (played by herself) was ousted from Hollywood. Weinstein’s former UK personal assistant Zelda Perkins (Samantha Morton) traded dealing with movie stars for training horses. Miramax assistant Rowena Chiu (Angela Yeoh) attempted suicide.

Another rule was to keep Weinstein’s presence in the film to a minimum; we see him very briefly when he storms into the New York Times newsroom – and we only see him from behind. “The entertainment world is always focusing on perpetrators, and what made them become who they are,” explains Schrader. “We wanted to concentrate on the survivors and their voices.”

The film also took care over its representation of Twohey and Kantor. And while some scenes were complete constructions – such as the one in the bar – others were depicted with utmost verisimilitude. “Jodi and Megan looked over all of the scenes and made sure the wording was accurate,” says Schrader, adding how they allowed the set designer into both of their homes to capture them, and the way they live outside of the newsroom, correctly on screen.

The process was “flabbergasting” for Kantor, who is shown balancing the investigation alongside family life – at one point, she gets a call from the actor Rose McGowan while with her young daughter, and hastily grabs a crayon and hands over her Netflix password so that she can speak freely. For Twohey, though, the film dug deeper, examining her struggle with postpartum depression following the birth of her daughter. “I haven’t talked about that before, so when we were speaking to the filmmakers about the possibility of putting it in the movie, I have to admit it made me feel a little vulnerable,” she says.

As daunting as it might have seemed, bringing their personal lives into the mix was a crucial component when it came to developing the film. “Jodi and I both agreed that it was important for working mothers to see themselves depicted in a realistic way. And I think for us, the fact that we were doing this story while juggling young children and all the responsibilities that came with that… on the one hand, that can be challenging. On the other hand, it also can be really galvanising.”

Weinstein was Twohey’s first case when she returned from maternity leave. “There was something about the way Carey Mulligan yanks the door to the newsroom open on her first day back, and you can see her kind of coming back into her sense of self, and how work really helps with that. It’s very true to life for many women.”

Both journalists forged close bonds with the actors playing them. “It was a combination of really spending some time together and getting to know them, but also not hovering and giving them licence to say, ‘this is not a documentary, this is art, you’re creating characters, go,’” says Kantor. “We feel lucky that we got to spend some real time with them, which, you know, on their end was more about research, but on ours, was more about trust and understanding the process.”

It’s impossible to talk about She Said without also acknowledging the precarious state of #MeToo today. In an article for The New York Times marking five years since the publication of their investigation, Twohey and Kantor charted the movement’s highs and lows. Optimism comes by way of 22 states passing laws to protect women in the workplace, reformed laws around the world that make it easier for survivors to report sexual violence, and further allegations against sexual predators that have been brought to light.

But there’s still no shortage of pessimism. In April, obituaries for #MeToo circulated online after Amber Heard lost her highly publicised defamation case against Johnny Depp. Then, nearly five years after admitting to sexual misconduct, Louis CK won a Grammy. And as claims of sexual misconduct mounted against NFL player Deshaun Watson last summer, he signed a $230m contract. Even Weinstein, who is currently imprisoned in New York and facing another trial in Los Angeles, has allegations against him that will probably never result in criminal charges – more than 90 women have accused him of sexual misconduct.

“Everything’s changed and nothing’s changed,” says Kantor of the movement’s progress. “But there have been real developments in the last five years. The toughest question has to do with low-income women. Consider a woman flipping burgers who’s getting groped by her boss. Is she really any better off than she was five years ago? I’m not sure you can really say that the answer is yes.”

Nonetheless, we shouldn’t get despondent. Social change, Kantor acknowledges, takes time. And some of the progressions will be harder to measure on a global scale. “Even as #MeToo takes these twists and turns, we’ve seen questions about safe workplaces and holding bad bosses accountable become more prominent than ever before,” says Twohey. “Jodi and I just feel like it’s like the gift of a lifetime to have been part of that.”

One criticism of She Said is that, by turning their book into a Hollywood film, Twohey and Kantor are feeding the very industry whose toxicity they exposed. Some have also pointed out that the film is produced by Plan B, the production company founded by Brad Pitt, who serves as an executive producer on the project and is currently facing allegations of abusive behaviour from his ex-wife, Angelina Jolie – Pitt’s representatives have denied these claims, calling them “completely untrue”. His involvement in She Said, however, is thought to have been minimal.

“He wasn’t present while we were shooting,” says Schrader, explaining that Pitt’s partners, Dede Gardiner and Jeremy Kleiner, were the “hands-on producers” she worked with. “They accompanied this project from beginning to end,” she adds. “I personally never met Brad Pitt.”

As for doubts around turning their investigation into a film, Kantor has a different take. “I think that’s part of the power of the project,” she explains. “Because it returns the Weinstein story to his own medium.” 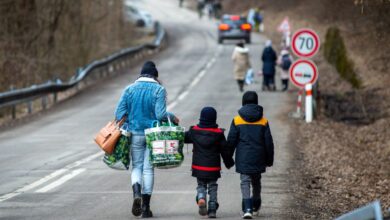 What happens when you get your period during a war? 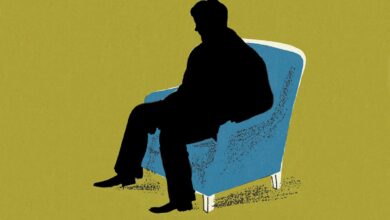 Who is this man in my house?: London women are finding a potentially dangerous lifeline in Airbnb 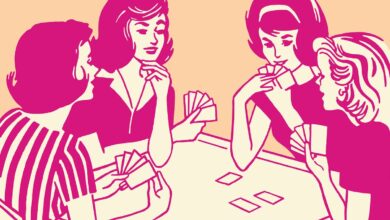 The girlbosses who girlbossed too close to the sun: The demise of ‘women’s utopia’ The Wing was long overdue