There’s a lot of ambiguity in Inventing Anna. Not knowing what it wants to say is one of many flaws in Netflix’s adaptation of the Anna Delvey story™, which tells the scandalous tale of Anna Sorokin, an apple-cheeked twentysomething born on the outskirts of Moscow who posed as a German heiress to scam her way into New York City’s elite. Yet while the show is unsure of where it stands on Anna Delvey; on capitalism; on the state of new media, one thing is for certain: Inventing Anna really, really wants us to hate Rachel DeLoache Williams, journalist and ex-friend of Sorokin.

The hit nine-part show tells Anna’s story through Vivian Kent (Anna Chlumsky), a fictional stand-in for Jessica Pressler, a real-life reporter who penned the revelatory New York Magazine exposé on which the series is based. Rachel DeLoache Williams is the other journalist embroiled in Anna Sorokin’s mess. Williams features as a character in Inventing Anna, a show which seems hellbent on making her out to be the worst person in the world. Maybe it’s because the Netflix series needs a villain. Maybe it’s because Williams sold her rights to HBO.

Williams wrote the predecessor to Pressler’s piece, a first-hand account of her friendship with the faux-heiress, which was published in Vanity Fair (where Williams worked at the time) a month before New York Magazine ran their story in April 2018. Its nadir was a hellish holiday the pair took to Morocco the year before, on which Williams ended up footing a $62,000 bill under the impression she’d be reimbursed by her supposedly mega-rich pal. Later that year, Williams helped organise a sting operation to arrest Sorokin in Los Angeles. At Sorokin’s 2019 trial, Williams testified against her former friend, who was being charged on multiple counts of grand larceny, fraud, and theft of services. Williams also secured a book deal and sold the TV rights to her story. These events are dramatised in Inventing Anna, only they appear to be staged with the primary purpose of making Williams look terrible.

In episode five Rachel (Scandal’s Katie Lowes) waltzes into the sauna where Anna (a believably off-kilter performance by Ozark’s Julia Garner) and her new BFF Neff (Alexis Floyd) are indulging in a midday sweat. Rachel takes an immediate dislike to Anna’s new pal who, by this point, has been established as an affable figure of realness amid a flock of phonies. In our minds, Rachel hates Neff; we hate Rachel. So unexplained are Rachel’s feelings toward Neff that we can only conclude she’s annoyed that someone else appears to have tapped her cash-cow.

The remaining four episodes are further nails in Rachel’s coffin. She is portrayed not only as a genuinely nasty person – the kind who makes fun of others for struggling during an exercise class – but an opportunistic parasite. On the Marrakech holiday-from-hell, Rachel is loathsome. She picks a fight with Kacy (a do-no-wrong trainer played by Laverne Cox) and believing that Anna will be picking up the tab, insists on booking the biggest suite and most lavish tasting menu. By the time she’s shelled out tens of thousands of dollars, we’ve received the message loud and clear: Rachel is a shady, social-climbing hypocrite who got what was coming to her. She’s a wannabe Anna, only without the guts or the clothes to pull it off.

Part of Williams’ villainisation is to be expected. Inventing Anna needed a character like Rachel. Her toxicity is totemic – it’s a symbol of the capitalistic ouroboros that Anna finds herself in; just as she uses others for their wealth, others use her too. Although Inventing Anna initially pussyfoots around a clear condemnation or commendation of Sorokin, later episodes lean to the latter, so a replacement bad guy is needed. But for a show that plays so brazenly with the truth – every episode begins with the caveat that “This whole story is completely true. Except for the parts that are completely made up” – why not have that bad guy be fictitious? If characters such as Anna’s fashion designer friend Val (James Cusati-Moyer) and her enemy-turned-mentor Nora (Kate Burton) can be inventions, why can the writers not conjure up the straw man it wants? Instead, Rachel shoulders that burden in the series, and the actual Rachel DeLoache Williams will inevitably face the consequences in real life.

Admittedly, the people involved in the Inventing Anna story – Sorokin, Pressler, Williams, etc – are subject to the same narrative creation as anyone else who has their persona willingly or unwillingly put to screen. That’s showbiz, baby. Williams knows it too. In an op-ed for Time magazine written before she had watched the series, Williams said that she expected “the dramatisation of my experience would make me uncomfortable”. But Inventing Anna goes beyond the usual parameters of artistic licence. It appears to have a personal vendetta against Williams. There’s not only the broad narrative it pushes of Rachel as a vapid schemer – which she might be, who really knows? – but the little digs at her expense. When Chlumsky’s Vivian dismisses Rachel’s writing as just “her complaining about her friend”, it feels like the scriptwriters are really kicking the boot in. For a show interested in grey areas, Inventing Anna goes out of its way to make us hate Rachel. But worse than that, it wants us not to believe her.

Inventing Anna’s final episode chronicles Anna’s 2019 trial. It’s within these courtroom scenes that the show delivers its coup de grâce in the assassination of Rachel’s character. As is relayed in an effective cross-examination, Williams made the most out of her run-in with Sorokin. There was the $300,000 book deal for My Friend Anna, which made it onto Time’s list of best books in 2019; $35,000 from HBO for the TV rights to her story (an amount that could increase to approximately $300,000); and the $1,300 that Vanity Fair paid her for the original article. This information – all true, by the way – is delivered in speedy exposition by Sorokin’s likeable, underdog lawyer (Succession star Arian Moayed) who the audience wants to see succeed. It comes at a moment in the series when Anna is vulnerable and likeable. Meanwhile, Rachel is at her most detestable as she weeps great, big crocodile tears on the stand. But there are real life repercussions to the show’s very specific framing of those facts. Try reading Williams’ Vanity Fair article after watching Inventing Anna and you’ll see what I mean: suddenly the story of a young woman tricked into taking on a debt greater than her annual salary reads like she is a swindler herself – such is television’s influence.

Inventing Anna establishes two sides, Team Anna and Team Rachel. The truth is far more complex, something that can hardly be discerned between a scrupulously researched report and a first-person account, let alone a watered-down TV adaptation. The needless demonisation of Rachel seems to forget she is a character with a real-life counterpart. It’s hard not to watch Inventing Anna without thinking this is Netflix taking an early swipe at Williams’ forthcoming HBO project – release date pending – brutally undermining its credibility. As Anna’s lawyer Todd reassures her after Rachel’s convincing turn on the stand, “This is not her show. This is our show.” He’s right – but HBO will afford Williams her right of reply soon.

Inventing Anna is available to stream on Netflix

Michael Parkinson, 87, says he ‘gets sick of’ old talk show clips as he ‘doesn’t recognise’ himself

Andrew Buchan on playing Matt Hancock in This England: ‘If it’s too raw and too soon… steer clear’ 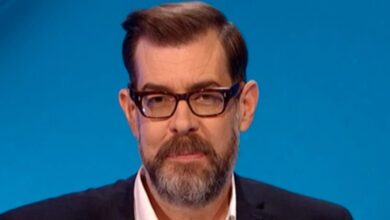