After a series of Valentine’s Day posts, Kanye West has now shared screenshots of his private conversation with estranged wife Kim Kardashian.

The 44-year-old rapper shared screenshots of messages where the Skims founder calls out his actions and says that he’s creating a “dangerous and scary environment” for her boyfriend and SNL star Pete Davidson.

“Someone will hurt Pete and this will be all your fault,” Kardashian wrote.

West, who has legally changed his name to Ye, captioned his post in capital letters: “Upon my wife’s request please nobody do anything physical to Skete. I’m going to handle the situation myself.”

Last week, Davidson made his relationship with Kardashian public by referring to the KKW Beauty owner as his “girlfriend”.

The couple first met on the set of Saturday Night Live in October 2021 and have since been spotted together a number of times, going on dates and holidaying together.

Ye shared more screenshots of his conversation with Kardashian where he tells her that he will do “everything to protect our family”.

“I listened to you and told everyone that nothing happens to Skete,” he added.

Skete seems to be Ye’s nickname for Davidson.

When Kardashian asks why Ye can’t keep their conversation “private”, the Donda rapper replies saying: “Cause I got a text from my favourite person in the world.

In his most recent post, Ye also revealed that he sent a truckload of roses to Kardashian on Valentine’s Day.

Amid all this, Ye’s partner Julia Fox confirmed her split with the “Follow God” rapper.

Speaking to Fox News Digital on Monday (14 February), a representative for the 32-year-old actor said: “Julia and Kanye remain good friends and collaborators but they are no longer together.”

Fox and Ye had been dating since New Year’s Eve.

They spent a whirlwind month going out for lavish dinners, shopping sprees and attended Paris Fashion Week, all of which was documented on Fox’s social media.

However, things changed last week after Kardashian featured on the March cover of American Vogue.

Following the release of the images, Ye posted the picture of his ex-wife and four children to Instagram with the caption: “God please bring our family back together.”

Ye later spent the weekend posting various images to Instagram, including what appeared to be a screenshot of a text from Davidson. In the now-deleted post, West used the caption to say he didn’t want Davidson to see his children. 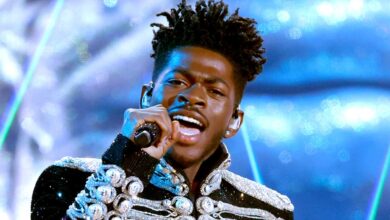 Davido: ‘Africa is beautiful, but we don’t have the best leaders handling the economy’