The battle for golf’s future began as a cloak-and-dagger operation at Centurion. Players tip-toed through the broken glass and into the comfort of their moral vacuums as they dodged questions and offered platitudes about growing the game. But by the time darkness fell over Hemel Hempstead on Saturday, the disguise had been ditched and the sabre-rattling was front and centre as Charl Schwartzel collected £3.85m and Greg Norman trained his vengeful crosshairs on the PGA Tour. “They couldn’t squash us,” he declared shortly before a fleet of military planes cartwheeled through the sky as part of LIV Golf’s victory parade.

The civil war may have only just begun but there can be little downplaying the significance of this landmark. The field at Centurion might have been weak – a rabble of anonymous prospects, fading forces and barely a handful of genuine stars – but Saudi Arabia’s incursion into golf is no longer a threat on the horizon. A genuine tournament unfolded over three days on the outskirts of north London, the players hailed its success in spite of the moral ambiguity and then took off into the sunset with their bank accounts engorged. Andy Ogletree, the world No 1,371, walked away with £100,000 despite finishing dead last, some 31 shots off the winning score.

“Where the money comes from is not something I’ve ever looked at,” said Schwartzel in a neat summation of how golfers are choosing to bury their heads in the sand. That approach has led to players being labelled “stooges” by Amnesty International and accusations of “betrayal” by a coalition of more than 9,000 families affected by the 9/11 terrorist attack. But what makes the LIV Golf series quite so extraordinary is how brazen it is. This is not a pernicious act of sportswashing, it’s a transparent and hostile takeover where the ludicrous sums are being waved in plain sight.

After Norman’s self-congratulating speech at the prize-giving ceremony on Saturday, Yasir Al-Rumayyan, the head of Saudi Arabia’s Public Investment Fund, took great pleasure in announcing that LIV Golf would award the first player to shoot a round of 54 as many millions of dollars. It is a foolish prospect – the lowest score in PGA Tour history is 58 – but that is precisely the point. There is a bottomless pit of money to burn, the fire is being lit inside an oil drum and it is only a matter of time before more players are lured to the beacon.

LIV Golf makes its first stop in the US later this month, with Bryson DeChambeau, Patrick Reed and Pat Perez already confirmed as the latest players to enter the fray. Rickie Fowler, Jason Kokrak, Matthew Wolff and Bubba Watson, if he can recover from injury, are soon expected to join them. “Trust us, this is just the beginning,” Norman said, and it’s hard to foresee anything that can hold back the tide.

The PGA Tour has gone on the offensive, suspending defectors and inviting the prospect of long legal battles, but it’s clear they already have no option but to co-exist with LIV Golf. The sheer scale of wealth on offer is proving irresistible even to those players that pledged their loyalty to the PGA Tour barely a few months ago. Money is triumphing in the face of loyalty, legacy and morality, and that is a precedent with which golf is already intimately familiar. Schwartzel was 10 years old when South African apartheid officially came to an end. Norman was one of the star names he’d watched eschew the sporting boycott of the country to play in the lucrative invitation-only Million Dollar Challenge. In golf, the Saudis have found the perfect accomplice with a long history of being for sale.

The vast marketing budget spent emphasising the differentiating aspect of the LIV Golf events, from the team format to the shotgun start, might have added a level of intrigue, but it was never meant to mask the blatancy of it all. When Peter Uihlein’s birdie putt fell on the 18th hole, the only thing that mattered was quite how many hundreds of thousands of pounds it had been worth. The pretence was no longer required. The money had spoken, the players had stopped to listen, and the people behind LIV Golf had all the proof they needed to know this sporting and geopolitical land-grab can stretch much, much further. 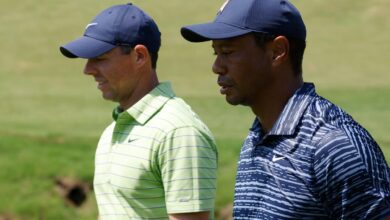 PGA Championship 2022 LIVE: Leaderboard and latest updates as Rory McIlroy and Tiger Woods out on course 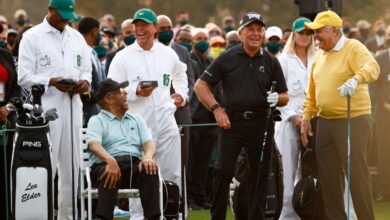