Novak Djokovic maintains he has “always been a great student of wellness, wellbeing, health, nutrition” after reiterating his stance over refusing to be vaccinated for Covid-19.

The Serbian admits he could change his mind in the future after being deported from Australia after a row surrounding an exemption for the Covid vaccine.

But the 34-year-old’s decision has been partly influenced by previous lifestyle changes surrounding his diet and sleeping patterns, meaning he is ready to miss more Grand Slams this year in order to remain loyal to his principles.

It was a life-changing moment. Djokovic was in Croatia in the summer of 2010 for a Davis Cup tie and was having a consultation with Dr Igor Cetojevic, a nutritionist and fellow Serb.

Cetojevic told Djokovic to stretch out his right arm while placing his left hand on his stomach. The doctor then pushed down on Djokovic’s right arm and told him to resist the pressure. The strength Djokovic would feel in holding firm, the doctor said, was exactly what he should experience.

Next Cetojevic gave Djokovic a slice of bread. He told the bemused player not to eat it but to hold it against his stomach with his left hand while he again pushed down on his outstretched right arm. To Djokovic’s astonishment, the arm felt appreciably weaker.

It was what Cetojevic had expected. His crude test had been to discover whether Djokovic was sensitive to gluten, a protein found in wheat and other bread grains. Looking back, it was the moment when Djokovic discovered why he had suffered so many mid-match collapses in his career – and the starting point for a lifestyle change which led to his becoming world No 1 just 12 months later.

Until now Djokovic has been reluctant to go into detail about the regime that has turned his life and career around. Today, however, the 34-year-old Serb tells his story in a remarkable book, Serve To Win, which reveals how changing his diet has transformed his health and tennis.

From being a player with suspect fitness, Djokovic has become arguably the greatest athlete in world tennis, combining stamina and strength with extraordinary speed and flexibility. He became world No 1 in 2011.

Djokovic’s connection with Cetojevic goes back to the 2010 Australian Open. The doctor, who had no interest in tennis, was at his home in Cyprus, flicking through the television channels, when his wife suggested they watch Djokovic’s quarter-final against Jo-Wilfried Tsonga. Djokovic was two sets to one up against the Frenchman when he suffered another of the physical crises that had bedevilled his career. He had trouble breathing and vomited violently during a toilet break. His strength sapped, he won only four games in the last two sets as Tsonga coasted to victory.

The watching Cetojevic immediately suspected what was wrong. He guessed that Djokovic’s breathing difficulties were the consequence of an imbalance in his digestive system which was triggering an accumulation of toxins in his intestines.

Cetojevic and Djokovic’s father had mutual friends and six months later the doctor was doing the bread test that confirmed his original suspicion. Cetojevic told Djokovic that he suspected food sensitivities were causing his physical problems and affecting his mental state. He told the player he could help him devise a diet that would be right for his body and could transform his health and fitness.

Subsequent blood tests showed that Djokovic was strongly intolerant to wheat and dairy products and mildly sensitive to tomatoes. Being told to stop eating bread and cheese and cut down on tomatoes was not the best news for someone whose parents owned a pizza restaurant, but the open-minded Djokovic was willing to give it a go.

Bread and pasta are staple foods in Serbia, but Cetojevic asked Djokovic to try a new gluten-free diet for two weeks. The effect was immediate. Djokovic felt lighter and more energetic and slept better than he had ever done. When Cetojevic suggested after a week that he should eat a bagel, the negative impact was startling. Djokovic felt sluggish and dizzy, as if he had a hangover.

When he switched permanently to the diet, the benefits quickly followed. Within 12 months Djokovic was 11lb lighter and feeling stronger and healthier. Ever since following the regime, he has felt fresher, more alert, more energetic and mentally sharper.

Djokovic’s early years as a professional were very different. In 2005 he had taken the first set against Guillermo Coria at the French Open but retired in the third because “my legs had turned to rock and I couldn’t breathe”. During a victory over Gaël Monfils at the US Open three months later he took four medical timeouts after running out of breath.

Djokovic had always worked hard on his fitness and in the search for a solution to his problems – which some put down to asthma – he changed trainers, adopted new training regimes, had nasal surgery and took up meditation and yoga. Although his physical condition improved – he claimed his first Grand Slam title at the 2008 Australian Open – the mid-match collapses did not go away.

When he moved his pre-season training camp to Abu Dhabi at the end of 2009, hoping to acclimatise to heat before heading to Australia, Djokovic thought he might have found the missing piece in the jigsaw, only for the meltdown against Tsonga in Melbourne to revive all his concerns. Thankfully for the Serb, however, Cetojevic was watching.

The key to the diet Djokovic now follows is the absence of both gluten – which is present in most foods – and dairy products. He also cuts out as much sugar as possible. The world No 1’s diet is based on vegetables, beans, white meat, fish, fruit, nuts, seeds, chickpeas, lentils and healthy oils. 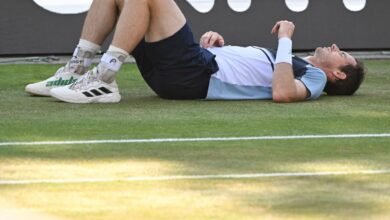 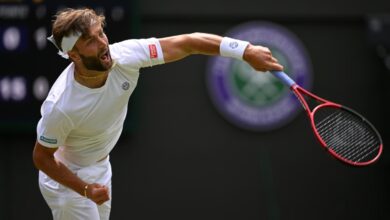