One person has died as a wave of powerful storms roll across the southern US, leaving eight million people under tornado watches.

A person was killed in unknown circumstances in eastern Texas in the early hours of Tuesday amid hail storms and high winds which downed trees on top of several homes and took out power lines.

Tornado warnings were issued in swift succession from the National Weather Service throughout the day, across a number of states from southern Mississippi to the coasts of Georgia and South Carolina.

More than eight million people were placed under warnings including in the cities of Tallahassee, Florida; Mobile and Montgomery, Alabama; and Macon and Savannah, Georgia.

The greatest threat for strong tornadoes is focused across parts of east-central Georgia into South Carolina in the next one to two hours, the NWS Storm Prediction Center in Norman, Oklahoma reported at 3.22pm (Central Time).

More than 17,000 people are currently without power in Texas, and 15,000 residents in Georgia. Atlanta’s Hartsfield-Jackson airport had 119 flights delayed and three cancelled.

In Texas, one person was injured when the storms swept through Johnson County, about 40 miles southwest of Dallas. Brittaney Deaton became trapped in an RV behind her family’s home after the trailer flipped over. She said her stepfather got injured trying to free her but is expected to recover.

“I was screaming on the phone. I couldn’t get out. I was terrified,” Deaton told KDFW-TV. “And I felt like I was just trapped, like it was going to roll with me in it. And I just thank God that I got out.”

The Storm Prediction Center said on Tuesday afternoon that there was an enhanced risk of severe thunderstorms across parts of the Southeast into the evening.

Damaging wind gusts and several tornadoes remained possible across the region, including a more isolated severe threat in south Texas, where isolated supercells capable of large hail and severe wind gusts are possible.

Isolated strong and severe thunderstorms are also through tonight across parts of the lower Missouri Valley into the Ozarks and northwest Oklahoma.

There is much debate among scientists on whether the climate crisis is playing a role in tornado outbreaks.

Twisters are tricky to study partly because they are relatively short-lived. In the years before cell phones, data largely relied on people spotting tornadoes and calling them into the National Weather Service.

However the body of research is growing. A study in 2014 from the National Severe Storms Laboratory found that in the past 50 years, clusters of tornadoes have become more common.

A separate 2018 study found that over the past four decades, America’s “Tornado Alley” appears to be shifting towards the East Coast, away from typical paths through Kansas and Oklahoma.

AP contributed to this report 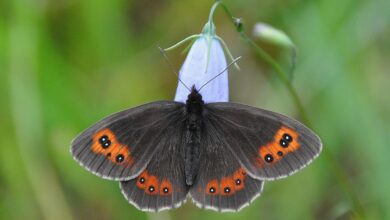 The British butterflies that could be lost to extinction 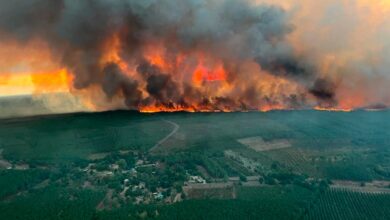