Police demanded the details of a man who held up a “blank piece of paper” outside parliament, amid a string of arrests targeting anti-monarchy protesters.

Paul Powlesland, who is a barrister, filmed his interaction with an officer who claimed that the sign “may offend” people if he wrote “not my King” on it.

Mr Powlesland said he was threatened with arrest, writing on Twitter: “Just went to Parliament Square and held up a blank piece of paper.

“Officer came and asked for my details. He confirmed that if I wrote ‘Not My King’ on it, he would arrest me under the Public Order Act because someone might be offended.”

The lawyer added: “A period of quiet mourning for the Queen is fine, but using that period to cement Charles accession as King and cracking down on any dissent to the accession as disrespectful is outrageous.”

It followed the arrest of a heckler who shouted at Prince Andrew in Edinburgh and the charge of a woman who held up a sign saying “abolish monarchy” at a proclamation ceremony for Charles III.

Mr Powlesland filmed part of his interaction with a police officer who approached him on Monday afternoon, hours after the King attended a ceremony with parliamentarians in Westminster Hall.

The footage showed Mr Powlesland asking the officer why he was asking for his personal details.

“Just so I can check and make sure you can be here,” the officer replied.

Mr Powlesland said he was merely in the city where he lived and noted that other people had been arrested.

“I was holding up a blank sign, why are you asking for my details?” he asked.

The officer replied: “Because you said you were going to write stuff on it that may offend people around the King … it may offend someone.”

Mr Powlesland said: “I said I was going to write ‘not my King’ on a sign and you ask for my details? Who’s that going to offend?”

The recorded ended with the officer telling the barrister he would give him some “advice”. No arrest is believed to have been made.

Legal author the Secret Barrister wrote on Twitter that the officer had misinterpreted the Public Order Act, adding: “Unless the sign if threatening or abusive, no offence is committed. Being merely offensive is not an offence.”

The exchange came hours after police were filmed moving a woman holding a placard saying “not my King” away from the Houses of Parliament.

A spokesperson for the Metropolitan Police said: “A member of the public was asked to move away from the Carriage Gates outside the Palace of Westminster this morning in order to facilitate vehicle access and egress through the gates.

“She was not arrested and was not asked to leave the wider area.”

Carriage Gates was the location where terrorist Khalid Masood murdered a police officer in 2017, in the first Isis-inspired terror attack to strike the UK, and the entrance is constantly guarded. 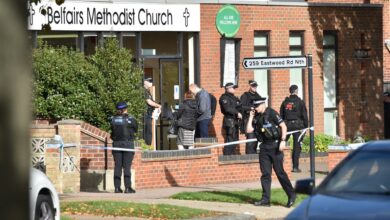 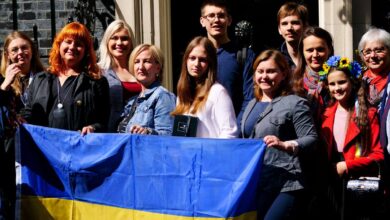 Daniel Barwell: Labour councillor who ‘plotted to import magic mushrooms’ to US apologises to voters 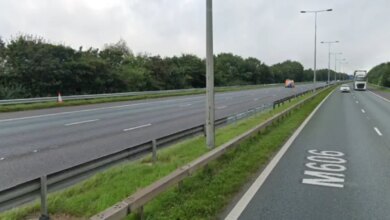