Russian president Vladimir Putin has condemned the sanctions placed on it by western countries in the wake of Moscow’s invasion of Ukraine.

“The economic blitzkrieg against Russia had no chance of succeeding from the very beginning,” Mr Putin said at a forum in St Petersburg on Friday, adding that the sanctions were “more harmful” to those who imposed them. He sought to reassure Russians that Moscow was capable of overcoming the “mad and thoughtless” sanctions.

Many western countries have imposed restrictions on Russia in order to strike a balance between punishing the nation for its war on Ukraine and protecting their own economies and interests.

However, Mr Putin has claimed that the EU alone might end up losing more than $400bn (£326bn) because of all these restrictions.

The Russian president said inflation was increasing across the 27-member bloc and the real interests of people in Europe were being sidelined, BBC News reported. He did not provide any further explanation.

In its latest round of sanctions, the UK is targeting the influential Patriarch Kirill, head of the Russian Orthodox Church, and the country’s children’s rights commissioner, Maria Lvova-Belova. They were both subjected to asset freezes, travel bans and transport sanctions.

Putin allies Sergey Savostyanov and Alexey Isaykin, deputy of the Moscow city Duma and president of the Volga-Dnepr Group respectively, and four Russian army colonels, known to have been engaged in atrocities against civilians at Bucha, were likewise punished.

“We will not tire of defending freedom and democracy, and keeping up the pressure on Putin, until Ukraine succeeds,” foreign secretary Liz Truss said.

Speaking at the ongoing 25th St Petersburg International Economic Forum, Russia’s deputy prime minister Viktoria Abramchenko said the sanctions placed on Russia by the western world have worsened the global food market, which has already been damaged by the coronavirus pandemic.

“Marine transport and air freight supply chains might be suspended as a result of the sanctions… Russia can no longer export food to those places in need,” Ms Abramchenko said.

Ukraine’s allies have imposed a raft of sanctions and economic penalties on the aggressor since 24 February in the hope of bringing Russia to its knees by targeting its leaders and tanking its economy, while also supplying Volodymyr Zelensky’s forces with military hardware and funding.

But after almost four months of fighting, Russia continues to make gradual incursions in the country’s south and east, destroying whole cities in the process, despite clearly finding the fightback much tougher than anticipated and its own forces less well-prepared and equipped than assumed. 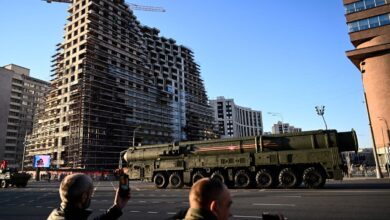