Hillary Clinton is a regular target on conservative nightly news. Her interventions in down-ballot races and public appearances are becoming more frequent. Her popularity within the party is sky-high. You’d be forgiven for thinking that it all feels very familiar.

After years of keeping a relatively low profile, the Democratic grandee who nearly became America’s first woman president is staging a political comeback. After two failed efforts, there is even talk of another run for president in 2024.

The former secretary of state returned to the national stage on Thursday as she spoke at the New York State Democratic convention, ostensibly in support of Kathy Hochul’s nomination for governor. What followed was not a speech for New York, but to the nation — and it was aimed at a familiar foe.

“I know many of us hoped that defeating Trump would start to heal our divisions, that maybe,  just maybe, the madness would break. But now it should be clear to all of us that the struggle for unity and democracy is far from over,” she said.

“It is one thing to have political disagreements, those are natural and healthy. But it is an entirely different thing altogether to lose a shared sense of truth, facts and reality itself.”

It was yet another reminder, if one were needed, that she and her party have been fighting the same battle for more than five years: How to deal with the unique threat posed by Donald Trump. Ironically, it is Mr Trump’s refusal to accept his loss to Joe Biden, and his promotion of conspiracy theories about a stolen election, that has drawn Ms Clinton back into the fray.

Ms Clinton’s reemergence on the national scene comes at a grim time for Democrats. The party is expected to take a beating in November’s midterms and Joe Biden’s job approval has declined across most demographic groups since September. Given that Mr Biden will be 82 when 2024 comes around, and amid swirling doubts about the viability of his vice president, Kamala Harris, many have wondered aloud who could step in to take the nomination for the presidency should he decide not to run.

A recent op-ed in the Wall Street Journal suggested that should Democrats lose control of Congress in 2022, Ms Clinton “can use the party’s loss as a basis to run for president again, enabling her to claim the title of ‘change candidate.’”

“Based on her latest public statements, it’s clear that Mrs Clinton not only recognizes her position as a potential front-runner but also is setting up a process to help her decide whether or not to run for president again,” the op-ed, written by pollster ​​Douglas E Schoen and Andrew Stein, continued.

Such predictions are not being taken too seriously within the party. But Ms Clinton’s reappearance comes at a time of intense debate between centrists and progressives over its future direction. It is another battle that Ms Clinton has herself fought when she went up against progressive figurehead Bernie Sanders for the nomination in 2016.

Speaking in December, the former secretary of state made a plea for moderation in the Democratic Party’s message as a way to win votes from independents.

“I think that it is a time for some careful thinking about what wins elections, and not just in deep-blue districts where a Democrat and a liberal Democrat, or so-called progressive Democrat, is going to win,” she said.

Ms Clinton has given no clear indication that she intends to run for president, yet. But her comeback has sparked a renewed debate about her role in the next few years.

On the convention floor following her speech, there was widespread support for Ms Clinton, as one might expect at such an event. But what do they think about Hillary 2024?

Kristen Blush, a photographer and Democratic Party member, wearing an ‘I Heart HC badge,’ was unequivocal.

“Hillary has always been a dominating force in the Democratic Party, especially here in New York. She’s well-respected, she’s given decades of public service as senator and secretary of state and now as an independent woman who is still admired,” she said.

But, she added that Ms Clinton’s future role in the party may not necessarily be running for the White House.

“I assume that she will continue to be a mentor and not run for office,” she said. “I don’t see where it would make sense for her to do that. We all wanted her in 2016, so it’s really hard to come to that reality.”

“All these people still come out for her. We’re really lucky that she still comes out to talk to us,” she added. 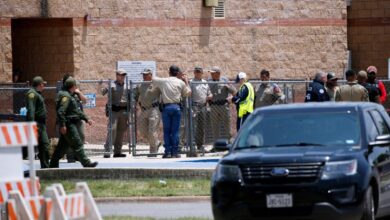