Moments after sexually abusing a nine-year-old boy in 1976, Sir Jimmy Savile OBE told his victim the following: “Don’t you dare tell anyone. Nobody will believe you. I’m King Jimmy. We know where you live.”

One of the many, many troubling things about the name Jimmy Savile being added to the meaningless tombola of current political buzzwords is that, as the days go on, it’s getting harder to remember the truth around the vile rapist, abuser and paedophile. Hence that jolting account above. As Britain’s political tribes forensically fight over whether Boris Johnson made a “false” accusation about Keir Starmer’s time as director of public prosecutions (DPP), I worry we’re all starting to miss the point. When politicians like Johnson randomly invoke Savile as if he were some kind of generic bogeyman, it ignores the fact that this man existed, that he has real victims that exist and that the gaps in society he exploited still exist, too. Enter the BBC…

Coming to the Beeb later this year is The Reckoning, a miniseries about the life of Savile, starring Steve Coogan and written by Neil McKay – who has previously dramatised the lives of Fred West, the Moors murderers and most recently Stephen Port in Appropriate Adult, See No Evil: The Moors Murders and Four Lives respectively. Announced last October, the story will trace the life of “a man who rose from working-class origins to become one of the biggest stars of British television, but in death has become one of the most reviled figures of modern history”.

Boiling this down to just the raw politics for a second, I’m not sure it’s possible to imagine a more nerve-shredding prospect for a BBC executive than this: a drama about a paedophile whose name has been unexpectedly thrust into the political realm by a government in crisis, made by a broadcaster whose future is in crisis thanks to that same government. On top of that, it’s the same broadcaster who employed said paedophile for decades and then indefensibly squashed independent journalistic investigations into his disgusting crimes after his death.

What this means is that, with timing so unfortunate that it’s almost grimly comic, the BBC have a project in the works that absolutely, totally needs to be the single most faultless, accurate, unblemished, impeccable and perfect work of art ever made. Insert popcorn emoji here.

But here’s the thing: I’m actually optimistic. The Reckoning has the potential to be more disastrous than Russell Brand and Jonathan Ross reading The Satanic Verses during the interval of Jerry Springer: The Opera. But as you’ll see, I trust the people involved and their track record, I think they’re currently doing the right things by the victims of Savile and I also hope and expect the BBC take this huge opportunity to redeem themselves and show us that the phrase “lessons have been learnt” isn’t just jargon. Moreover, a decade since his accusers were finally heard, I think we as a country still haven’t fully come to terms with the enormity of Savile’s crimes. The BBC don’t just need this to be perfect. We need this to be perfect.

Even before Johnson started peddling his intriguing mix of far-left and far-right memes – that Starmer “spent his time prosecuting journalists” (presumably a nod to Julian Assange, whose original extradition process occurred during Starmer’s time as DPP) and that he didn’t “prosecute Jimmy Savile” – The Reckoning was already controversial. Victims of Savile initially expressed shock and worry that the drama would exploit their pain for ratings and glorify his crimes.

Yet while Johnson has ignored the victims’ groups that say he is “weaponising their grief” or that his false claims have “triggered all the flashbacks”, writer McKay recently pointed out that victims of Savile have been invited on set to see the recording and meet the people telling their story. Some are even appearing in it. Similar set visits happened with relatives of victims of Myra Hindley and Ian Brady on See No Evil: The Moors Murders. From unpicking extreme evil to showing how institutions inadvertently allow evil to be carried out (witness holding the Met’s feet to the fire in Four Lives), I really feel McKay has the best possible track record to handle a story as uncomfortable and thorny as Savile’s.

I would unequivocally extend that same trust to Coogan, too. The first time Steve Coogan played a real-life character was in 24 Hour Party People, as the mercurial Granada TV presenter and Haçienda owner Tony Wilson. It led New Order’s Peter Hook to wryly summarise it as “the biggest t*** in Manchester being played by the second biggest t*** in Manchester”. This is, of course, a trifling reference in the current context – but it still hints at a genuine fearlessness that he has as a performer, as well as a public consciousness and a campaigning spirit. His gifts as a mimic alone are also not up for debate. Ironically, Coogan used to do the voice of Savile on not-aged-super-well puppet satire Spitting Image in the Eighties.

And though some might think it’s insulting for a “comic” to play this important part, I also think it’s spectacularly fitting – given that the only people telling the truth in public about Savile’s wretchedness during the Eighties and Nineties were people in the alternative comedy scene. Through hints and veiled references (to avoid the silencing force of Savile’s famously litigious nature), people such as Jerry Sadowitz, Stewart Lee, Richard Herring, Chris Morris and Frank Skinner all managed – I think heroically, in retrospect – to convey a vital truth: there’s something dodgy about Jimmy Savile. It’s not pious to say they might even have saved people.

The BBC wasn’t the only national institution that messed up around Jimmy Savile. The NHS gave him a flat and office at Stoke Mandeville hospital. The care system allowed him repeated access to a school for vulnerable children, where he traded cigarettes for sex. The police dropped investigations into him. The Catholic church gave him an Order of St Gregory the Great. Downing Street and the monarchy pinned an OBE and a knighthood to his lapel.

This isn’t a backhanded way of saying the Beeb should get some slack, more that maybe there’s something to celebrate about an institution that’s not scared to confront the past. Because, sadly, recent events have shown that we need The Reckoning more than ever. I don’t believe this country has effectively processed Jimmy Savile and his crimes yet. We have not understood how he hid in plain sight. How so many accusers went ignored for so long. How someone so garlanded could be so bulletproof. What do we do differently as a society, post-Savile? I’m not sure I can think of much. The same story occurs across the Savile affair: that while junior employees knew something was up, they couldn’t convince their superiors to do anything. Have we radically switched into a country known for speaking truth to power in the last 10 years? I think not.

Critics of the BBC should remember that it’s an institution that’s able to flagellate itself in public, from the gently mocking (W1A) to last year’s ruthless Panorama investigation into Martin Bashir. This ability needs to be taken to a new level for Savile. To justify making The Reckoning, it needs to be a reckoning for the BBC itself. To honour the victims, to assuage the many who think it’s a case of profiting from their own mistakes, it needs to hold itself to account with a ferocity that makes Four Lives feel gentle by comparison.

When the leader of the opposition feels that the prime minister has incited a mob to call him a “paedophile protector” in the streets, you know we’re very far away from having a dignified, national narrative about Jimmy Savile. The fact that Savile’s legacy is suddenly able to become an abstract toxic meme (like Pizzagate was to the QAnon conspiracy) is extremely worrying. But so too is the idea that there’s a young and potentially vulnerable generation alive right now who don’t even know the name Jimmy Savile. We need to accept that, as a country, we still need to do the work. With Boris Johnson in charge, Britain needs a reckoning on many things. But before that, it needs The Reckoning.

‘What’s below beta male? That’s where I am’: Simon Bird on his Christian sect sitcom and The Inbetweeners’ mixed legacy

Sian Clifford: ‘The scripts that I get sent are never my age’ 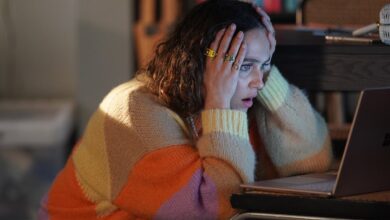 The Flatshare review: This romcom won’t save the London rental market, but it might make you smile

Hacks star Hannah Einbinder: ‘There are a lot of bullies who grew up to be comedians’