We are just three days away from a huge heavyweight title fight between Tyson Fury and Dillian Whyte, with the pair set to main event at Wembley Stadium with the WBC belt on the line.

The all-British bout, one of the biggest in the nation’s history in the sport, marks Fury’s second defence of the title that he won from Deontay Wilder in the rivals’ second in-ring meeting. By stopping the American in the 11th round last October, Fury retained the belt, and former sparring partner Whyte is his next challenger. Whyte, 34, last competed in March 2021, knocking out Alexander Povetkin to avenge his own stoppage loss to the Russian from August 2020.

As inactive as Whyte has been in the ring since, he has been similarly inactive outside of it, refusing to attend last month’s pre-fight press conference. The “Bodysnatcher” finally broke his silence this week, however, playing down the mind games of Fury, 33, by saying: “He can’t get in my head. Even if he gets in my head, he’s only gonna find a lot of disturbance in there.” Open workouts took place today, and we’ll bring you all the latest news and previews ahead of the fight.

Follow all the build-up to Tyson Fury vs Dillian Whyte, below. 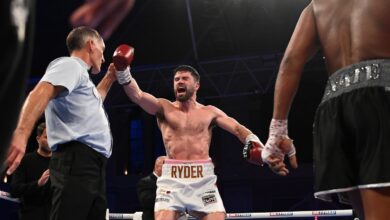