There has been a lot of talking and more than a decade of waiting, but finally Amir Khan and Kell Brook will settle their rivalry in the ring this evening as the British pair go head-to-head in a main-event bout at the AO Arena in Manchester.

The former champions have known each other since their teenage days, even before Khan announced himself to the world as Team GB’s youngest ever boxing medalist at the 2004 Olympics. The Bolton-born fighter and rival Brook, representing Sheffield, both went on to win world titles, with Khan also competing in major fights in the United States. Despite the now-35-year-olds’ strong dislike for one another and a long-standing demand from fans for the fighters to settle their differences between the ropes, a bout has eluded the competitors and their followers until now.

Tonight, Khan and Brook face off in a catchweight bout at 149lbs, with the opponents having traded harsh words this week at a fiery press conference and heated weigh-in. “I’m worried about a few things. I’m worried about Kell’s health after the beating I’m gonna be giving him,” Khan said on Thursday. Brook retorted: “He’s definitely gonna sleep Saturday night when I smash him in. He’s going on his face or his back, one of the two.” On the undercard, heavyweight Frazer Clarke makes his professional debut following his medal-winning venture for Team GB at last summer’s Tokyo Olympics, and Natasha Jonas makes her third attempt at becoming a world champion.

Follow live updates and all the latest results from Khan vs Brook and the entire undercard, below. 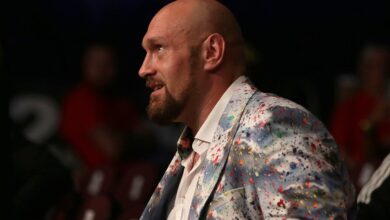 ‘Send me the paperwork’: Derek Chisora responds to Tyson Fury 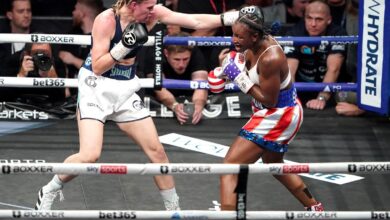