Everybody knows about Novak Djokovic’s movement, the textbook backhand and that fearsome mentality to always respond during vital points. But even at 35 years of age and with 21 grand slams triumphs, there is a nuance to his game, a subtle adjustment to underline his relentless desire to improve and drain a final drop of potential from an extraordinary career.

Inconsequential to many watching, but Djokovic’s second serve in his straight-sets Australian Open quarter-final victory over Andrey Rublev demonstrated how difficult it can be to expose the Serbian’s vulnerable side.

In fact, Djokovic’s gutsy second serve shone brightly in this contest over two hours. Revamped with extra menace at pivotal moments in the match, but also guided with immense control at other stages, it is enough to torment opponents.

The Russian could be seen screaming both at himself and his team in the crowd at times as Djokovic dialled up an unpredictable and audacious second-serve game.

Rublev actually landed slightly more first serves (70 percent) than Djokovic (64 percent), but won just 61 percent compared to 80 percent on the Serbian’s. Yet the intriguing factor in the game is how Djokovic was rarely flustered when Plan A, dictated by every player’s ideal first serve, eluded him.

Djokovic won 50 percent of the points on his second serve points, illustrating the difficulty in seizing a break – with just three such occurrences in the entire tournament. His win rate on the second serve was almost 78 percent more than Rublev, who boasts a flashy game built behind a rocket of a forehand.

“The first two sets don’t speak of the reality of the match,” Djokovic conceded. “We had some close games, Andrey is a great opponent and a great player, one of the biggest forehands and one of the quickest players on the tour.

“All the important shots and moments, I found my best tennis, it’s what makes me so pleased.”

It was a compliment from Djokovic, yet it exposed the lack of variety in Rublev’s game, which was apparent when you delve a little deeper into those second serves.

Djokovic’s range leaves opponents befuddled with 66 kmph between his slowest and fastest second serve, a gap 27 kmph greater than Rublev, ensuring better timing than the Russian.

Djokovic has taken years to perfect this part of the game since emphasising it as part of his tactical repertoire alongside former strategy coach Craig O’Shannessy.

By holding back, noticeably at the US Open in 2018, Djokovic gains accuracy, allowing him to target specific parts of his opponent’s return game.

This secret weapon shows Rublev just what it takes to make that leap from a top five player in the world, with three career titles, to shattering that quarter-final barrier in the grand slams, which has blocked his path to a maiden slam on seven occasions already.

Djokovic leaned on that second serve in the fourth game of the second set, trailing 2-1, forcing an error from his rival to level the contest. It would mentally break Rublev and lead to a decisive break in the next game before Djokovic raced into a two-set lead.

Despite a furore surrounding Djokovic’s left hamstring injury, his conditioning looks impeccable both against Rublev and Alex de Minaur. And the way he paces himself throughout the contest shows with his service game. There is always enough gas in the tank to crank up the speed and throw off his opponents at any stage.

If Rublev was concentrating on combating the placement of the serve, then Djokovic disrupted his flow and slammed the door on any possible comeback in the third set, hitting a new match-high 204 kmph, just 4 kmph short of Rublev’s best.

Rublev must evolve if he is to emerge at the front of the queue when Djokovic and Rafael Nadal eventually set off into the sunset.

His work in the forecourt proved particularly costly as the match began to unravel into the third set.

The way he bludgeons his forehand is an impressive sight, but the depth to which he can improve has been illustrated by Djokovic in his 19th grand slam season. Djokovic has never looked so complete. 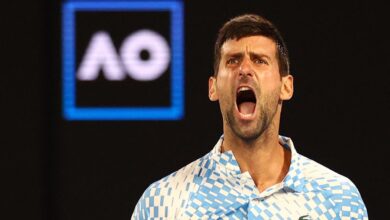 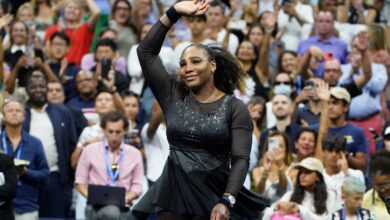 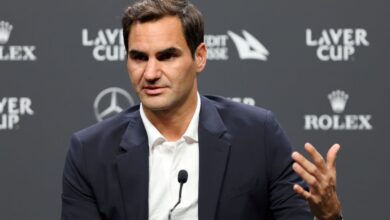