Follow all the action as the singles quarter-finals get underway on Day 9 at Wimbledon. Defending champion Novak Djokovic ended the fairytale run of Tim van Rijthoven in the fourth round as the Serbian looks to win the men’s title for the fourth time in succession. He will now open the action on Centre Court this afternoon against the Italian No 10 seed Jannik Sinner, who defeated Spanish breakthrough star Carlos Alcaraz in the previous round. The second men’s quarter-final this afternoon features Cameron Norrie against the world No 58 David Goffin. Norrie is the last Briton standing in either singles draw and is bidding to reach the first grand slam semi-final of his career.

The first women’s quarter-final sees No 2 seed Ons Jabeur take on Marie Bouzkova. Jabeur is the overwhelming favourite, having yet to drop a set so far. Bouzkova, ranked No 66 in the world, is a somewhat surprising name in the latter stages of the draw but produced an emphatic upset against Caroline Garcia in the fourth round. It is far less of a shock than the second women’s quarter-final being played today, which is an all-German clash between Tatjana Maria and Jule Niemeier. Maria’s best performance at Wimbledon came back in 2015 when she reached the third round while 22-year-old Niemeier, who ended Heather Watson’s run, is making her debut in the main draw.

Follow all the action, scores and results from Wimbledon live below: 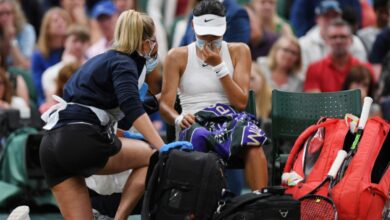 Emma Raducanu: The Wimbledon defeat that paved the way to grand slam history 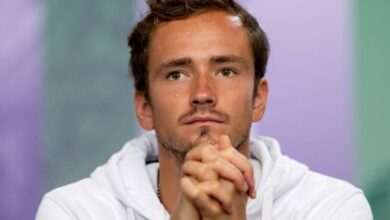 Wimbledon announces ban on players from Russia and Belarus

Naomi Osaka was ‘very worried’ about returning to French Open 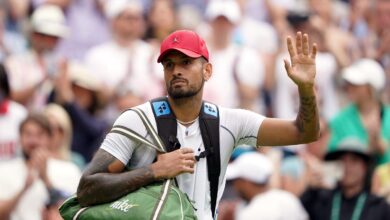