Vladimir Putin has signed a decree recognising parts of eastern Ukraine as independent entities and sending Russian forces there to “maintain peace” — an explosive move that threatens to push the crisis closer to all-out war.

The Russian president made the gesture live on television after an an emotional address in which he referred to eastern Ukraine as “ancient Russian lands” and said it was “managed by foreign powers”.

In a chilling speech, he said “the responsibility for the possible continuation of the bloodbath will be on the conscience of the regime that is ruling in Kiev.”

It was not immediately clear if Russian forces had indeed entered Ukraine.

The recognition of Luhansk and Donetsk is likely to torpedo a last-minute bid for a summit to prevent Russia from invading Ukraine as it rips apart the existing Minsk peace treaty and gives Russia a pretext to send troops across the border.

Boris Johnson said the move is “plainly in breach of international law” and “a flagrant violation of the sovereignty and integrity of Ukraine,” adding: “I think it’s a very ill omen and a very dark sign.”

The UK government will announce fresh sanctions against Russia on Tuesday in response to Russia’s decision to recognise separatist regions.

Foreign secretary Liz Truss said she would be setting out the measures “in response to their breach of international law” – saying Mr Putin’s move would not go “unpunished”.

The British sanctions will be not be the full package of sanctions prepared in recent weeks, The Independent understands, with further retaliatory economic measures expected if Russia invades Ukraine.

The EU’s top officials also said the bloc will impose sanctions against those involved in Russia’s recognition of two separatist regions of eastern Ukraine.

EU Commission president Ursula von der Leyen said the bloc would “react with unity, firmness and with determination in solidarity with Ukraine.”

Earlier, during a dramatic and theatrical televised meeting of his Security Council, the all-powerful Russian president warned he would soon make a decision on independence for Luhansk and Donetsk, which have been at war with Kiev since 2014.

In extraordinary scenes, he paraded senior advisors taking turns to speak on the issue before declaring they were in favour of independence.

Putin cross-examined ministers and spy chiefs on the question of whether to recognise the two breakaway Donbass regions. One after another, they walked to a white lectern in a column-lined hall to paint a relentlessly grim picture of the situation in Donbass.

At one point, Mr Putin intervened to emphasise he had not discussed in advance what the officials were going to tell him, as if to dispel the impression that the proceedings had been choreographed.

He chastised foreign intelligence chief Sergei Naryshkin when the unfortunate official said only that he “will support” the recognition of the Donbass regions.

“Will support or do support? Tell me straight, Sergei Yevgenievich,” Putin said.

When a faltering Mr Naryshkin then said he supported the breakaway regions becoming part of Russia, Putin upbraided him again: “We’re not talking about that… We’re talking about whether to recognise their independence or not.” 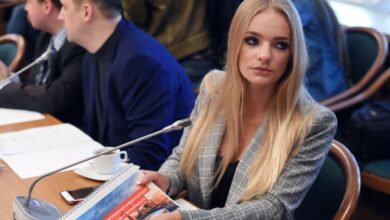