Two storms are set to batter the UK this week with winds of up to 90mph predicted, which could put lives in danger, forecasters have warned.

Storm Dudley is expected to hit northern parts of the UK on Wednesday and Thursday, before the harsher Storm Eunice arrives on Friday.

The Met Office has issued weather warnings for high winds, effective across the country.

The storms may cause danger to life and “damage to buildings, such as tiles blown from roofs,” the forecaster warned.

Paramedics in parts of England warned people against going outdoors as Storm Dudley swept in.

Thousands were left without power in northwest England on Wednesday evening amid gusts upwards of 70mph.

In Scotland, most train services were cancelled on Wednesday afternoon onwards due to safety reasons, Scotrail said.

East Midlands Railway and LNER have asked passengers not to travel on Friday due to the threat posed to services by Storm Eunice.

Network Rail has introduced speed restrictions on the east coast line over fears that infrastructure will be damaged in the high winds.

‘We couldn’t cool down’: Firefighters on a ‘non-stop’ day of blazes and what they expect from climate change 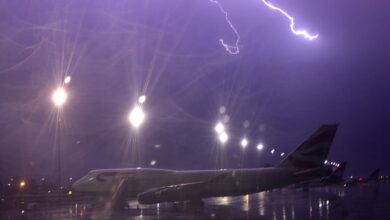 How the climate crisis is making flying more dangerous